At the start of the NY session, risk off flows dominated with stocks down, sellers in the AUD, buyers in the JPY and USD.

Then a news report that Pfizer/BioNTech had clinical success on a vaccine for Coronavirus and the pre-market risk off flows were reversed.

ADP employment gains were less than expectations at 2.369M (vs 2.9M est), but it was still 2.3M.  Moreover, the revision was a huge 5.8M which moved the May number more in line with the Labor Departments numbers (you have to wonder if the ADP simply "reseasonalized data" to make their data look like the Labor Departments data).  In any case, it wasn't negative or some other big surprise,and the market is gearing up for another multi million gain in jobs at 8:30 AM ET tomorrow morning.

Later the ISM manufacturing index rose to 52.6 which was better than the 49.8 estimate. New orders in production rose smartly. Employment lagged.  The data nevertheless did not hurt the risk on reversal trend.

On the coronavirus front, California, Texas, Arizona remain problem areas. Florida showed a 4.3% rise with new cases higher than yesterday. However the percentage gain was less than the 7 day average (for what that's worth).  Arizona case count reached a new record. Houston Medical Center is reported ICU units at 102%. California reported a record new case number as well.

Other coronavirus news included Apple announcing that they would reclose 30 additional stores across the US bringing the total to 77. Pres. Trump said that he wants more money for individuals in the next stimulus package and also said that he supports the use of masks and will wear one in a group situation (although he has not in the past).

As flows moved into risk on, the US dollar started to move lower. It is ending the day behind the CAD as the 2nd weakest of the major currencies (what did Canada do to deserve the weakest currency status on its Canada Day holiday?).   Leading the charge to the upside of the major currencies was the GBP.  Technically it also moved above its 100 day moving average, in 50% retracement midpoint of the range since the December 2019 high.

Muddying the "risk on" story in the forex market at least was that the AUD was still mixed on the day and the JPY was still mostly positive (it tends to move lower on "risk on" flows).  Him 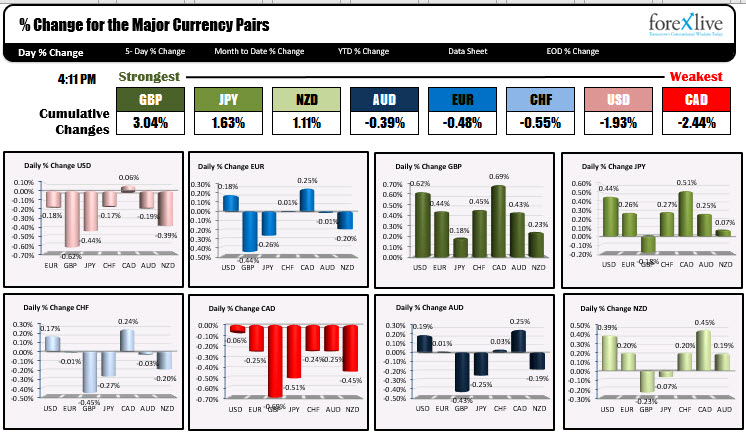 Some technical levels to high in the new trading day: