In the North American and European stock markets today, all the major indices closed higher.  A number of the European indices closed at session highs. The US indices reached up 1% and backed off. The S&P index was this biggest gainer at +0.64%.

In the US debt market today, yields move higher on the back of the exit out of flight to safety trades.  The 2 year rose 7.5 basis points. The 10 year rose 8.1 basis points.  The yield curve was a little bit higher versus yesterday's close.  Today, the US treasury auctioned off 30 year bonds. The  demand was about average.

The big news today was supposed to come out of Washington with the US/China talks commencing.  There was also CPI data and the weekly initial jobless claims.
The CPI came in a little stronger than expected, but the YoY remains below the 2.0%, but the core inflation ex food and energy remained unchanged at 2.4%.  Real average hourly earnings YoY remained somewhat muted at 1.2% versus 1.4% last month.
As far as initial claims, they continue to show a solid jobs market with claims coming in at 210K vs 219K estimate.
The US/China trade talks were preempted by overnight headlines that sent markets up and down. At first, there were concerns that China would cut short the meetings.  That was later denied.  The markets settled in and took a more wait-and-see attitude vs speculation although there was rumblings that a deal might be made, but it would be a more watered-down start.
If by tomorrow the sides can agree on some concessions whether it be purchases from China, and delay of future tariffs by the US, it would be a step forward. To knock off the USTR Peter Navarro's "7 Deadly Sins", would be unrealistic at this point.
Although all that was happening, the real market moving news in the forex came out of the talks between Irish PM Varadkar and UK PM Johnson.  Headlines that the two leaders could see a pathway to a possible deal, sent the GBP sharply higher.  The GBP is ending the day as the runaway strongest currency of the day. The JPY was the weakest as traders exited the "relatively safety" of the JPY. The CHF and the USD were also sold on the same general flows. 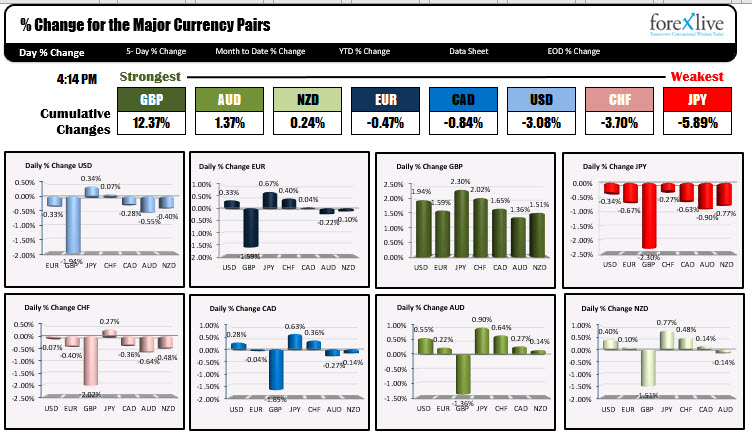 Some price action for the major currency pairs saw:
That's it for me today. For the Asian Pacific traders who will be starting their weekend, thank you for your support.  Wishing you all a happy and healthy weekend.