It was one of those days were the markets are ending mixed, near unchanged, with little in the way of market moving news.

Taking a look at the markets:

There simply is not a hell of lot to show for on the day in the major markets.
In the forex market, the GBP is ending as the strongest of the major currencies. The gains came on the back of a stronger than expected employment report in the UK.  The NZD is ending the session as the weakest.  They were the strongest and weakest at the start of the NY session.  For the USD, the greenback was mixed with gains vs the NZD, CHF, CAD, and JPY, and losses vs the GBP and EUR. The AUD was unchanged on the day. 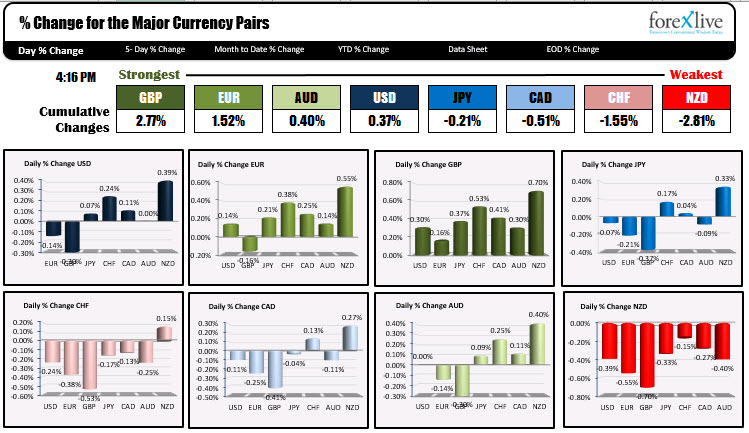 On the economic data front today, PPI data for May came in pretty much as expected with a scant 0.1% gain MoM. The YoY headline number was weaker than expected at 1.8% vs 2,0% est. and 2.2% last month. The core (ex food and energy), came in as expected at 2.3% vs 2.3% estimate.
Pres. Trump was active on Twitter. He even weighed in early on the stock market saying that it's a good day in the stock market.  That was the kiss of death as stocks gave up all their gains   That'll teach him.   Trump also said that he is holding up the deal with China as he wants to make sure the US gets a "great" deal.

China (outside of Trump himself) remains a key topic of interest.  Larry Kudlow was let out of the penalty box after saying the tariffs were paid by consumers a few week's ago. Today, he said on CNBC, that "We'd like to go back to where we were a month ago on China trade talks"   Be careful Larry....you don't want to make Pres. Trump look weak on the art of the deal.
For the EURUSD, the pair traded in a 35 pip trading range and held above the 1.1300 level in trading today (risk for traders looking for more upside). The high extended to 1.1337 in the US afternoon session. The 50% of the move down from the January high (so 50% midpoint of the year) comes in at 1.1338.  In the new day, a move above the midpoint would have traders eyeing the 200 day MA at 1.13647 going forward.  The price has not traded above the 200 day MA since May 2, 2018. That's a long time ago. Stay below the 50% and we could see a retest of the 100 hour MA at 1.1290 (and moving higher).
The USDJPY moved up to test a topside trend line at 108.81 level (high reached  108.796). The fall from there, took the price down to test the 200 hour MA at 108.48 (low reached 108.48).   The 100 and 200 hour MAs are converged at 108.48 currently. A move below those MAs is more bearish . Staying above and the bulls are still a lttle more in control (at least intraday).
The AUDUSD traded sideways for the day but below its 200 hour MA at 0.69637 level We currently trade at 0.6960. The 100 hour MA will be the barometer for the bulls and bears in the new trading day. Stay below and biase is tilted to the downside. Move above and bias shifts to the upside.