Forexlive Americas FX news wrap: Powell say Fed is prepared to lower rates and deploy QE if there is a downturn

The 2nd day of the testimony from Fed's chair Powell, was like the first. The economy is in a good place. It is too early to tell the impact of the coronavirus. He said he was concerned about the level of debt, but uncertainty around trade has lessened. He also said that in the next downturn is prepared to low rates but also use other tools such as QE and forward guidance.

That helped to keep the stock market buoyed which in turn helped to strengthen the dollar against the EUR, JPY and CHF. The greenback did not rising at all currencies. In fact, the runaway strongest currency of the day was the NZD, followed a distance behind by the AUD, but both those currencies have been beaten down.  Today, the NZD was helped by the RBNZ which spreads market rising they don't see a rate cut in 2020 after their interest rate decision in the Asian session.

While the NZD was the strongest, the EUR was the weakest with the JPY and the CHF also weaker on the day.  The USD was in the middle - strong vs some but weak vs. others. 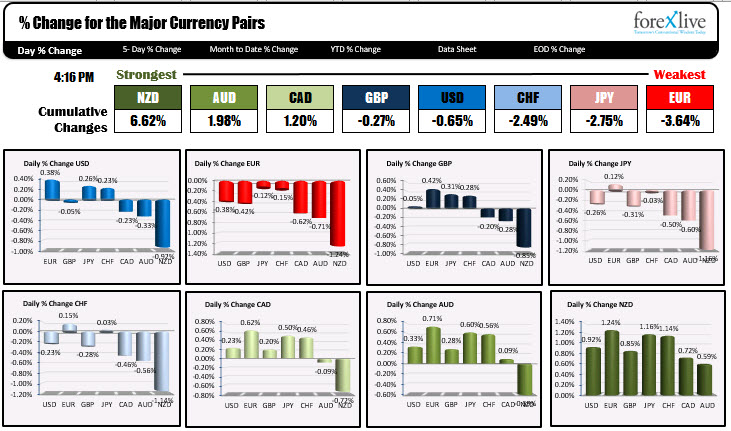 In other markets as New York traders look to exit for the day, shows:

The US stocks took heart of the Fed Chairs assurances that the Fed will be ready to stimulate in any downturn (whenever that may be), and rallied once again. They also continue to ignore the coronavirus concerns and potential for slower growth.
The major indices all closed at record levels with the Dow joining the S&P and Nasdaq in today (it was the 3rd straight record close for the Nasdaq and S&P).  The percentage low, percentage high and percentage close levels for the major North American and European indices are shown below. The US indices all closed at session highs.  European indices also closed near the days highs. The exception was the Portuguese PSI 20 which was the only major indices that fell trading today.

Of concern in the news today was a much higher deficit reported in the New York session session (the market ignored the news). The January deficit came in at $-33 billion versus an estimate of -$11.5 billion. The fiscal 2020 year today deficit stands at $389 billion versus a comparable fiscal 2019 year today deficit of $310 billion. That is a 25.4% increase in the deficit 2020 compared to comparable 2019 data. Budget outlays were up 22.3% versus a year ago while receipts were higher but only by 9.4%. Fed chair Powell was concerned about the deficit as well during his testimony.
Technically,