Forex news for the North American session on August 13, 2021

Every once in a while you get a piece of economic data, that makes you do a double take and say "What was that again?"

That was the case with the Univ. of Michigan consumer sentiment data for August released today.

This survey data is actually released twice a month. The first or preliminary estimate was released today for the month of August. It will be revised in two weeks (August 27).  The revision allows for those surveyed who did not get their responses in, to have a 2nd chance.  Typically, the changes from month to month are somewhat stable.  There are exceptions. For example, there was the plunge at the start of the Covid shut down in April 2020 of course from 95.9 to 71.0.  Back during the 2007 to 2009 recession there was another big fall from 73.1 to 57.5.

Today saw the 3rd largest one month fall from 81.2 in July to 70.2 in August.  It was the kind of move that makes you want to ask "Can you check that number please?".  After all, economic growth is still expected to grow its fastest pace in four decades. The JOLTS jobs data shows there are plenty of jobs.

On the negative side of course there is the Delta variant, and inflation is more persistent and sapping buying power from  consumers (although wages are moving higher as well).

After a second look just to make sure, the index indeed did fall that much. In fact it fell to the lowest level since 2011 even surpassing the low from the Covid shut down in April 2020 (the index fell to 71.5 at that time). The declines were across all incomes, age, education subgroups and regions.

Looking at the two major pieces, the current economic conditions gauge fell to 77.9 from 84.5, while the expectations index tumbled to 65.2 from 79 in July. To make matters worse, consumers raised their expectations for medium-term inflation (five years out) to 3.0% from 2.8% (although the one year inflation did fall modestly to 4.6% from 4.7%).

In the forex, the USD fell sharply, and is ending as the weakest of the major currencies. The biggest mover was the USDCHF which saw the dollar fall -0.86%. The USDJPY fell by -0.72%, and the dollar tumbled -0.59% versus the EUR. 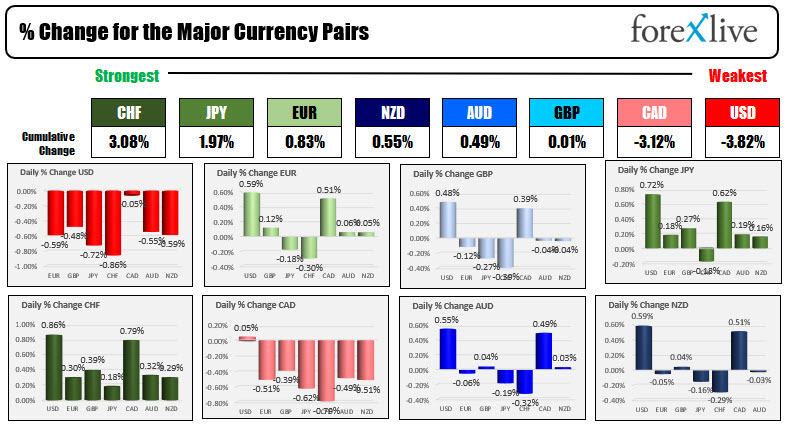 In other markets:
Technically: