The day did not have any economic releases to speak of, but the markets were instead focused on the breakdown of the US/China trade talks and retaliatory tariffs.   Although smaller in scope of course to what the US could impose, they have the ability to target some of Pres. Trumps middle American farmer base.   Also of concern by the markets, is if Trump imposes tariffs on US giants like Apple, or if China consumers start to shun Apple/American products internally. That could put a bigger than expected hurt on US companies, hurt the stock market further and take money away from the consumer. Finally, inflation remains low, but having inflation from the pass through of tariffs on goods is not "a win".
If a trade deal is done, that should be good for the US (not so good for China).
The point is...there is a lot of risk and that manifested itself in a tumbling stock market, lower yields and flow of funds out of proxies for risk and into proxies for safety.
For the stock market, below are the low to high ranges and closing levels for the major indices.  The US markets took the biggest hit in the Nasdaq marekt with a decline of 3.41%, but the falls in the S&P and Dow were significant as well (at -2.41% and -2.38% respectively).

European shares ended lower as well after some of the indices toyed with going positive (that failed).
In the US debt market yields tumbled as much as 8 bps (5 year) as investors flocked to the relative safety of US debt.    Below are the ranges and changes of the yield curve levels.

European benchmark 10 year debt levels were mixed with the flow into the "safety" of Germany, France and UK and moves out of the riskier Spain, Italy and Portugal.

In the fores market, the flow of funds moved in the "relative safety" of the JPY and CHF and out of the closest proxies to China - the AUD and the NZD. The CAD was also lower on the day.  The below charts show the % changes of the major currencies vs each other today. The AUDJPY was the largest mover, falling 1.35% (it was even worse before a modest rise into the close - see post here). 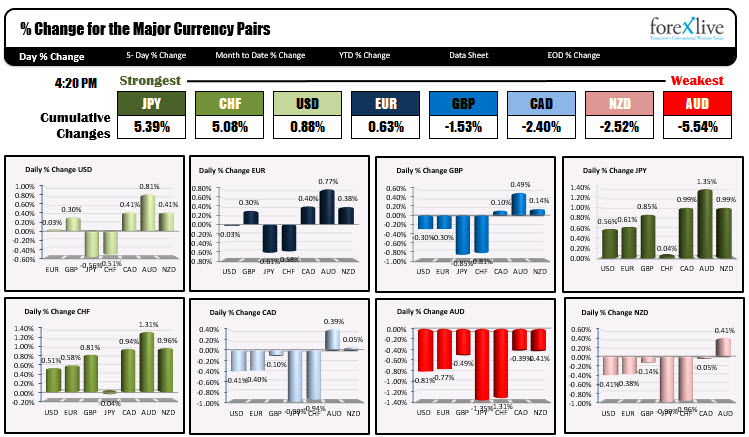 Some of the major pairs had differnt "stories" today. While the AUDUSD and the NZDUSD were lower and both closed at the lows, the NZDUSD did have a corrective move higher in the London morning sesssion that saw the pair return for a test of its 100 hour MA at 0.6590 area before moving lower (closing at 0.6564).  The AUDUSD trended from a high near the opening to the low anear the close.
For the EURUSD, the pair shot higher in early NY session and reached a swing area at the 1.12617-641 area. The inability to move above, led to buyers tilting to sellers. The price moved down toward the 100 hour MA at 1.1215 near the close of the day.
For the GBPUSD, it too rallied early in the NY session (high of 1.3046) then reversed and tumbled t a low of 1.29404 -helped by a fall through the 100 day MA at 1.3008 and a swing low area at 1.2980-86.