The markets have been preoccupied with trade concerns of late. So having a nice juicy economic number like US retail sales was something different. The data for the retail sales disapointed with the headline number -0.2% vs +0.2% estimate and ex food and energy also coming in weaker at -0.2% vs -0.3%.  Not good numbers.
Later industrial production also came in much weaker at -0.5% vs 0.0% estimate.
So prior to the US stock market opening, stocks started to move back lower. USDJPY and JPY crosses were heading south.  The JPY crosses tumbling, dragged the EURUSD and GBPUSD lower in support of the EURJPY and GBPJPYs falls.
And then the trade headlines started to come out of Washington.
First it was Mnuchin saying he is in "serious talks" with China to improve trade ties.  That is nothing new, but "serious talks" was maybe a ratcheting up from the oh so famiilar, "trade talks are progressing" soundbite.
Next, came a headline from the White House that Trump was to delay the decision on EU auto tariff imports for up to 6 months.   Remember that threat?  Well there seems to be a "stay of execution" for a while.
That helped to send the EURUSD from around 1.1183 to a high of 1.1224 (right at the 100 hour MA), before backing off.
Finally, to complete the Trifecta, CNBC reported that US trade representative Lighthizer is proposing a plan to get rid of steel and aluminum tarriffs on Canada and Mexico.  Remember those old tariffs that were to be removed after the USMC trade agreement way back when was agreed.  Well they never were. In fact the USDMC trade agreement that got rid of the NAFTA agreement is still not signed/executed.  HMMMM.
So all that helped lead to the USDJPY rallying. The JPY crosses also rallied back higher, and stocks turned from negative to positive (S&P was down about 20 points and ended up 16 points and the Nasdaq went from -53 points to +87 points at the close).
That's life in the financial markets with tariff bingo going on.
The one thing we continue to learn is that if the going gets tough in the stock market in particular, something  from Pres. Trump, Mnuchin, Lighthizer, etc (or all of the above) is just a a tweet or comment to the eager press corp away.
Below is the low, high and close for the major indices today. The markets, snatched victory from the jaws of defeat.

In the forex market, currency pairs were admittedly all over the place. The GBP ended the weakest.  The UK government and internal Brexit negotiations is simply dysfunctional, leading to the GBP weakness.  The CAD was the strongest helped by a technicall fall below its 100 and 200 hour MA at 1.3454-58 area. 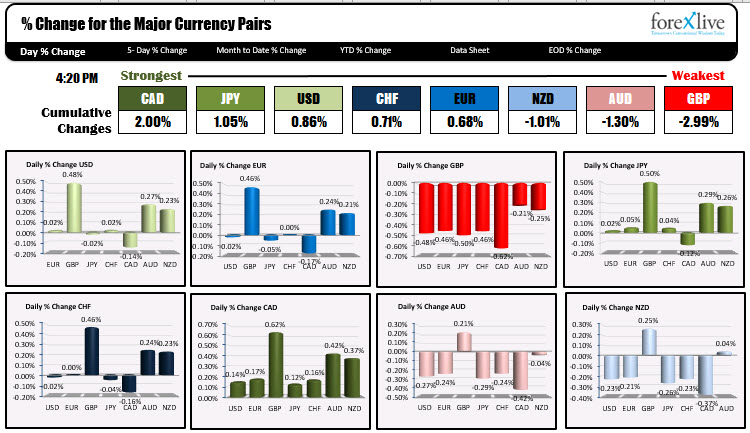