The NY session was not much of a session. The US markets were closed in observance of Martin Luther King day.  So no stocks, commodity, or stock trading.  Canada had exiting home sales come out (+2.2% vs -5.3% last month).  The IMF kept global growth unchanged at 3.4% but the mix was different.  In case you missed it:

It is nice to know but it had limited impact.

BOE Carney spoke later in the day. His comments were part academic and part "nothing really new" .  He was after all speaking at the London School of Economics.

The real action in the GBP occurred over the weekend with the gap opening on the hard Brexit speculation.  UK PM May will be speaking tomorrow at 11:45 AM GMT.    That gap had the GBPUSD opening up at 1.1994. The lowest low extended to 1.19859. The pair closed at 1.2050. So it was higher in intrday trading, BUT the close on Friday was way up at 1.2179 and the low on Friday was at 1.21197. So there is a gap left in it's wake.  Needless to say the GBP is the weakest of the major currencies.

IN other pairs today.

The EURUSD is ending down on the day and right around the 100 hour MA at 1.0599. The 200 hour MA remains at 1.0577 currently. The combination should be support if the buyers are to remain in control.

Below is a snapshot of the strongest and weakest at the end of the NY session. 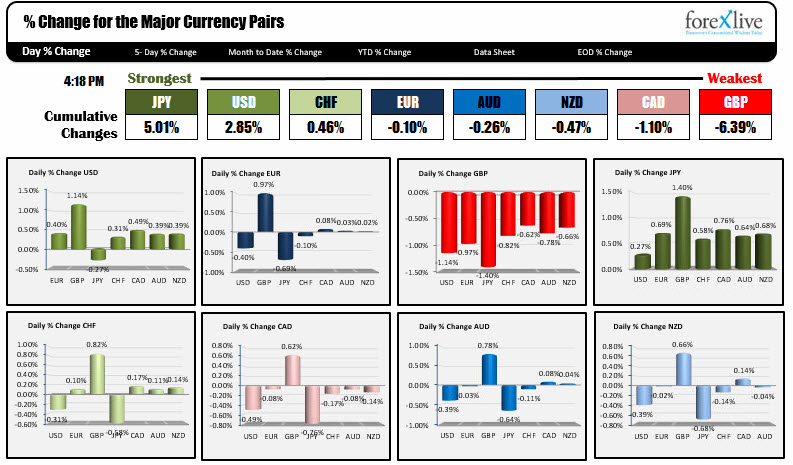