In other markets as the day comes toward the close:

The major indices closed at record levels and near the highs for the day as well:
In the US debt market yields were up marginally higher with the 2 year up 1 basis point and the 10 year up to basis points. Below are the ranges and changes for the yield curve.

In the forex market in the New York session the dollar recovered earlier declines.  At the start of the NY session, the greenback was down versus all the major currency pairs lead by a -0.51% fall vs the NZD, a -0.33% fall vs the AUD and a -0.24% fall vs the GBP. It was only higher vs the JPY at +0.07%.
At the end of the day, the dollar was still lower vs the NZD but only by -0.33% on the day an was lower by -0.28% vs the GBP, but had turned positive or near unchanged vs the other currencies (see the % changes of the USD vs the major currencies in the chart below.
Although the NZD and the JPY remained the strongest and the weakest on the day, the dollar recovered nicely. 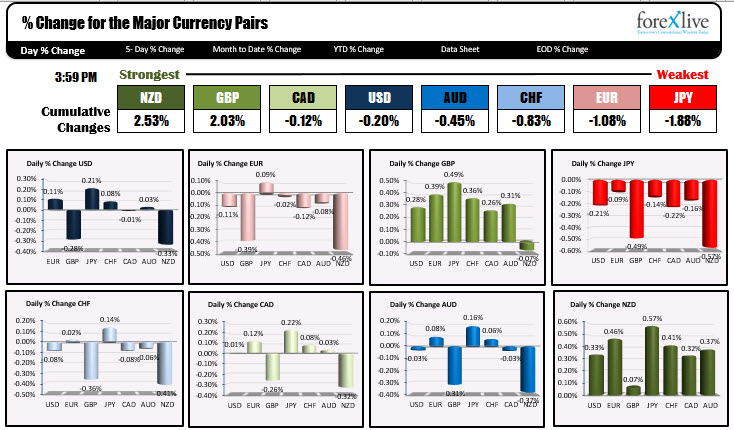 Helping the recovery was some decent data. The retail sales data was ok. The headline numbers were a touch higher than expectations but revisions to the Control group and the ex auto and gas breakdowns, took some of the good away.  So overall it was as expected.
What was beneficial to the dollar today was the Philadelphia Fed business outlook index which came in at 17.0 versus 3.8 estimate and 2.4 last month. That rise took the index to near the high going back to the 4Q of 2018.
Jobless claims were also better-than-expected at 204K vs 218K estimate and 214K last week. Admittedly, seasonals can have a positive or negative impact to the data around the new year, but on the surface it was a solid number.
The NAHB housing market index was a touch higher at 75 versus 74 estimate.
Technically,
Wishing our friends in the Asian Pacific session a happy weekend.   Good fortune with your trading