The data today in the US came in better than expectation and higher vs last month, and that helped to propel the USD to the strongest of the major currencies today.  The AUD was the weakest on the day. 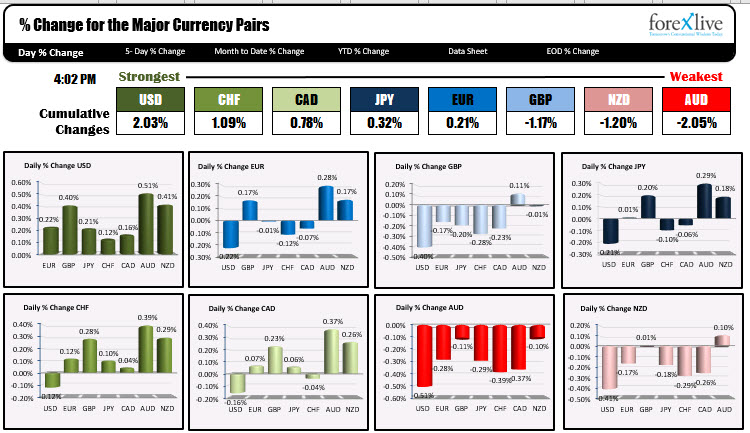 From the economic releases today:

Although Fed's Brainard and Kashkari, were probably more dovish vs hawkish, the data kept the dollar bid.
The dollar was also helped by rising stocks.  Both the S&P and the Nasdaq indices moved back above their 50 day MAs at 2866.47 and 7861 respectively. Although they closed off their highs, the gains were still pretty decent.  European major indices also moved higher in the session and closed pinned against the day highs.
Below are the % changes and the high to low ranges as welll.

The markets were also influenced by other nations "stories"

In the UK, PM May is as lame a PM as you can get. The question is can anything get done with regard to a unified/passable Brexit solution, as she tries to work a deal with Labour. It seems like an impossible task.  As a result, May will likely try to pass her failed plan once again in early June.  Meanwhile Conservative lawmakers are looking for May to outline a timetable for her resignation in case the plan is not passed (which is not likely). The net result is chaos and lack of progress continues to weigh on the GBPUSD, and led to it trading to the 1.2800 level today, and down for the fourth day this week.

In Japan, the government is thinking about lowering projections for the government and the trade war with the US and China is taking a toll economically.  That helped to weaken the JPY and send the USDJPY from a low at around 109.34 to a high that came up just short of the 110.00 level.

The AUDUSD was hurt in the early NY session by an article in the Australian Herald Sun, from RBA watcher Terrry McCrann saying that the RBS will cut rates at its next meeting in 18 days as a result of the unemployment rate moving back up to 5.2% from 5.0% expectations.  That helped to send the AUDUSD lower. It is closing near it's lows.

The NZDUSD also followed the USD trend and reversed earlier gains into the London session up to 0.6582, and later took out the Asian session low at 0.6544 on its way to new lows at 0.6532. The next hurdle is the low from last Wednesday after the RBNZ cut rates by 25 bps. That level comes in at 0.6520.

So overall, a positive day for the greenback, helped by good data, strong stocks, and some weaknees in the  other countries.