In other markets, a snapshot of the markets are showing:

IN the US stock market, the major indices are ending near the lows for the day.  Toward the close there was a report in the Wall Street Journal, that talks with China had stalled as the US tries to figure out what to do with Huawei.
Recall, that at the G20 meeting Pres. Trump said he would ease restrictions on Huawei. That feeling went away rather quickly, however, given the "national security" risks of the firm. Now it seems that it is enough to stall/stop negotiations.
After the close, Netflix reported that net new subscribers missed with 2.7M vs 5.0M estimate. That was bad enough to shave 11% off the price of the stock in after hour trading.   IBM beat and so did eBay so it is not all that bad.
Below are the % changes with the high% and low% as well. The major indices in the US all traded in the black today but only by small margins. Most of the activity was in the red today.  European shares slumped more than the US with the German Dax down -0.72%, Spain's Ibex down -0.99% and France's CAC down -0.76%.

In the debt market, yields in the US started near unchanged to down marginally, but are ending down 5 basis points in the 5 to 30 year part of the yield curve. The 2 year was down -3.3 bps. European yields were also lower with France's benchmark 10 year back below the 0.0% level (at -0.037%).

The lower stocks and the lower yields have helped to pressure the USD.  Looking at the % changes of the major currencies, the USD is neck-and-neck with the AUD as the weakest currency on the day. 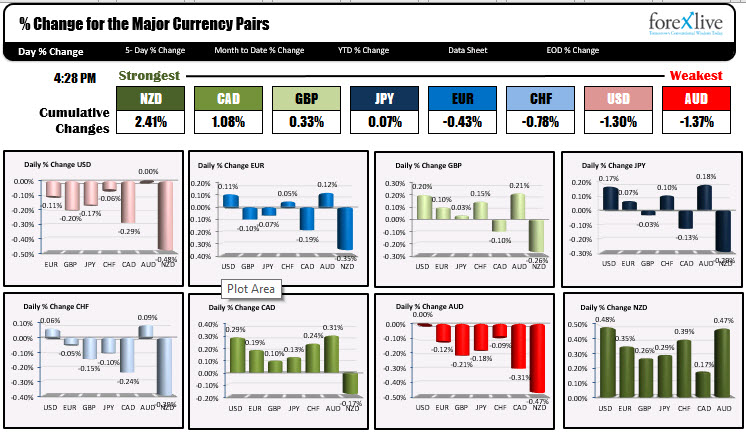 Technically, some trading highlights include:
In news today, US housing starts and permits were weaker than expected.  Canada inflation and manufacturing sales came in as expected.