The day started on the defensive as the positive from the Moderna Covid vaccine news on Monday was replace more by concerns about slower growth from the global surging coronavirus cases/hospitalizations/deaths.  That had risk/commodity currencies lower and more support in more safe currencies
Looking at the strongest to weakest of the majors the GBP and JPY battle it out for the strongest of the majors, while the AUD, NZD and CAD were weaker throughout the North American trading session. The USD started mixed and ended mixed with gains vs. CAD, AUD and NZD and declines vs the GBP, JPY, CHF and EUR.  Below is the snapshot of the rankings near the close for the day. 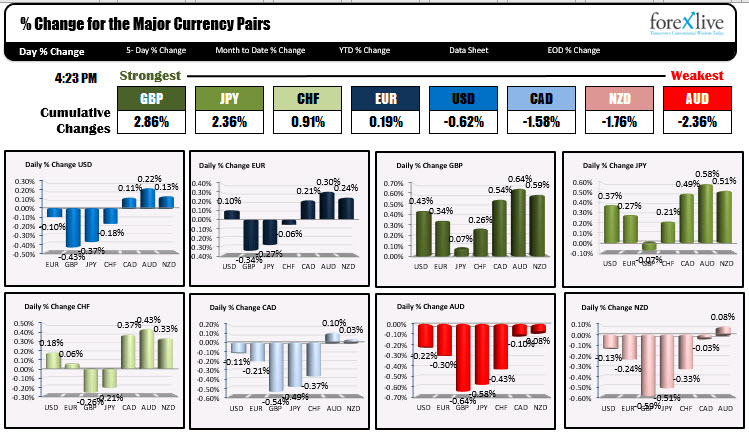 Adding to the negative tone was disappointing retail sales for October 2020. The headline number came in at 0.3% vs. 0.5% expected. Ex auto came in at 0.2% vs. 0.6%. The control group was also weaker at 0.1% vs. 0.5%. In addition the visions were lower for September. Although one bad month is not make a trend, the numbers did not help the overall bias and concern about the economy.  Nevertheless, it wasn't a disaster - the numbers were still positive - but it just wasn't great.
As a result of Covid and data concerns, the US stocks traded defensively today. The NASDAQ index was initially higher. It was helped by Tesla being added to the S&P index and news that Amazon would start offering prescription services.  However, the Dow industrial average and S&P index opened lower and remained in the red for the entire trading day.
By the close, all 3 major indices closed lower, but off the lowest levels as well. The only US gainer was the Russell 2000 index up a small cap stocks which closed higher, and at record highs for the 3rd consecutive day. In Europe, shares were mixed with France and Italy moving higher while Germany, UK, and Spain closing lower.

In the US debt market, yields move lower on growth concerns. In addition the 2 – 10 year spread flattened about 4 basis points to 68.91 basis points from 72.90 at the close yesterday

A big winner today was the price of bitcoin which is up near $900 at $17,586. The gain since the September low has been nearly 80%.
A technical look at some of the major currency pairs shows: