the weekly initial jobless claims disappointed at the start of the North American session. The claims number came in at 861K vs the estimate of 773K.  The prior week was also revised 2 848K from 793K previously reported.

The data this week corresponds with the survey week for the Bureau of Labor Statistics monthly report which will be released the 1st Friday of March. Last month the nonfarm payroll rose by 49,000 which was less than the expectations of 85,000.

While the better retail sales and higher PPI data yesterday still sent US treasury yields lower, the weaker data today from the claims did not deter the US yields from moving higher today. Below is a summary of the ranges and changes. There are a lot of eyes on the bond market.

The higher yield trajectory has had an impact on the equities. Today the major indices all moved to the downside with the Russell 2000 of small-cap stocks leading the way with a -1.67% decline followed by the NASDAQ index at -0.72%. Both the S&P and the Dow industrial average have been faring better of late as funds flow out of the high flying tech stocks, and into the more blue-chip variety. Although today: this is were lower. The Dow industrial average fell for the 1st time in 4 days and broke its today all time high close streak. The S&P and NASDAQ fell for the 4th consecutive day.

In the forex market, the GBP was the runaway strongest of the majors today.  The USD had its share of downs and up and back down again, but is ending as the weakest of the majors. The GBPUSD was the biggest mover with a change of 0.84% (to the upside). The GBPUSD reached a high price of 1.39853 which is getting close to the natural resistance target of 1.4000.  Other GBP crosses also were solidly higher with the GBPJPY and GBPCAD each of 0.65%, the GBPAUD up 0.63%. 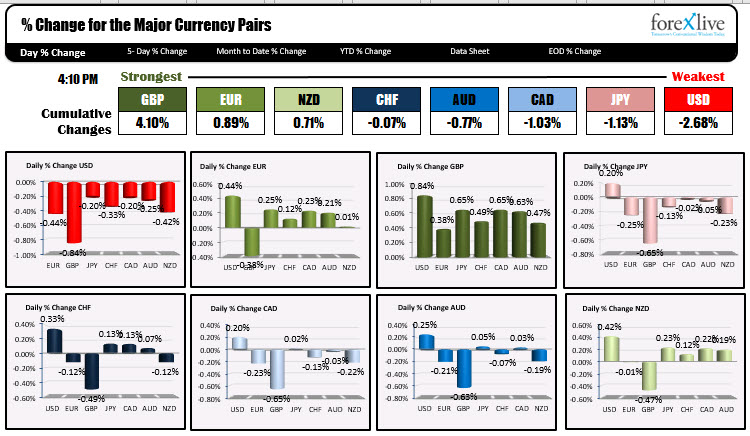 Looking at other currency pairs:

In other market s today:
Good fortune with your trading.