Forex news for near trading on December 2, 2019

In the US debt market, yields started the day higher with a steeper yield curve as well. As they progressed and data release was weaker than expectations, the shorter end did move lower with the 2 year down -1 basis point near the end of day. The 30 year still maintained a rise of 6.3 basis points. The 2-10 year spread moved up from 16.39 basis points on Friday to 21.69 basis points currently.

That feel good news was hurt from an early tweet in the day from Pres. Trump saying that he would reinstate tariffs on Brazilian and Argentinian steel and aluminum. China news over the weekend was also not all that positive on the trade front after the the US sign the Hong Kong bill. As a result, premarket gains in US indices were eroded with the major indices opening mostly lower.

That bias was helped after fundamental data in the US showed weakness. The ISM manufacturing data for the month of November came in much weaker than expected at 48.1 versus 49.2 estimate. That was lower than the prior month 48.3 reading as well. The employment component fell to 46.6 from 47.7 last month, and new orders also dipped lower to 47.2 from 49.1 last month.

At the same time.construction spending for the month of October also was much weaker than expectations with a -0.8% month on month change. That compared unfavorably with the 0.3% expected rise. Pouring salt in the news was that the prior month was revised sharply lower to -0.3% from +0.5% previously reported.

The week data helped to accelerate the dollar to the downside against most of the major currencies. The only exception was the USDCAD which saw the greenback advanced by 0.14% versus the loonie. The dollar fell against all the other currencies with the NZDUSD the weakest at -1.26%. The USDCHF fell by -0.87% and the AUDUSD fell by -84%.  Moreover technical levels were breached, helping the greenback's slide pick up steam. 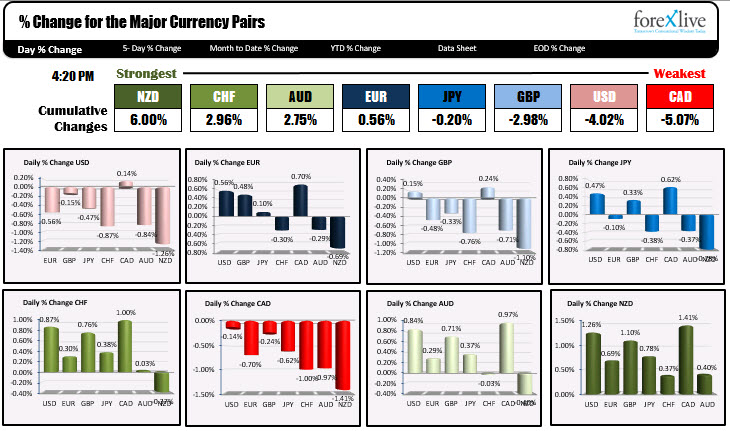 Looking at the EURUSD, it his ending the day with an 87 pip trading range. That is more than double the normal 41 pip range seen over the last month of trading.  In the process, the pair extended above the high price from last week at 1.10316, the 61.8% retracement at 1.10522 and then the 100 day moving average at 1.10708. The price rise did not stop until reaching 1.1088. That was just below the swing highs from November between 1.10894 at 1.10965.  The last 6 hours of trading saw the price stay above its 100 day moving average at 1.10708 which keeps the bulls/buyers more in control. In the new day a break above the 1.1089 - 96 area would open the door for more upside momentum likely in the pair.  If the 100 day moving average is instead broken on the downside at 1.10708, that is likely to see buyers turn to sellers on the disappointment from the break higher.