The USD moved higher in the North American session with the EURUSD falling to the lowest level since December 1, the USDJPY moving to the highest level since November 12. The AUDUSD fell to a new low going back to the end of December.  The greenback was the strongest of the major currencies at one point during the day, but late day selling helped to push the currency back toward a mixed result for the currency (with a small positive bias). The dollar ending higher vs the AUD, EUR, near unchanged vs the NZD, JPY and CHF and down vs the CAD.

The strongest currency of the day was the CAD. The weakest was the AUD (although the declines in the AUD have seen some dip buying into the close). 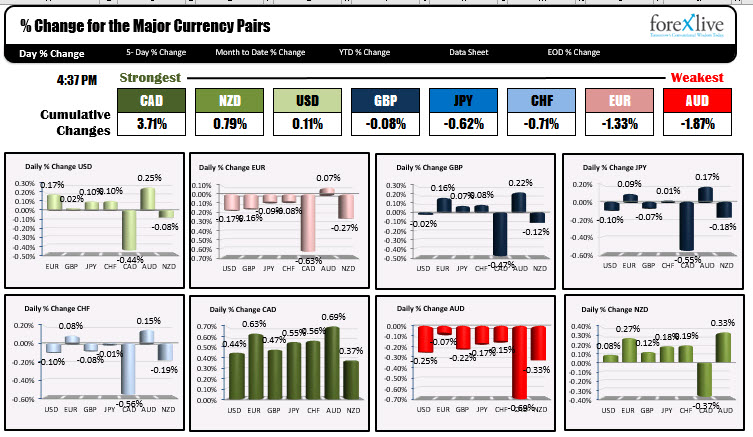 The data today was light with NY ISM  (weaker than expected) the only economic report today. The index fell sharply to 51.2 from 61.3, but the shut downs in the face of increased Covid cases likely contributed to the declines. Nevertheless, the economy in the US seems to be doing ok (stocks were up strongly again today), but Fed officials like Kaplan warned again today, that the economy is not out of the woods by a longshot.  Political wrangling is also back in full on mode with GOP looking for a $600B package while Dems are at $1.9T.  That is a pretty wide spread.  However, relatively, the US seems to be on better footing globally, which could/should keep the USD supported off the recent low levels.

US stocks rally for the 2nd consecutive day with the Dow industrial average just peeking out the NASDAQ index as the biggest gainer for the day:
European shares also advance today the 2nd consecutive. Below are the percentage changes for the major indices today all our above the 0.0%