In the US stock market today, the major stock indices gain for the 2nd day in a row in June. The Dow industrial led the game with a 1.05% increase. The S&P index and NASDAQ index have risen in 6 of the last 7 trading days.  European stock indices today close higher as well with the German DAX rising by 3.75%. The UK FTSE 100 was the weakest of the gainers with a gain of 0.87%.

In the US debt market today my yields were higher with a inching up of the yield curve as well. The 30 year bond rose the most by 3.5 basis points. The 2 – 10 year spread widened out to 51.89 basis points from 50.27 basis points at the close of trading yesterday.

Each morning at the start of the North American session, I take a snapshot of the rankings for the major currency pairs. In this morning's post the AUD and the NZD were the strongest, while the JPY and the CHF were the weakest.  The rankings are determined by cumulating the snapshot of percentage changes of each currency vs. each other. Below is how that ranking looked: 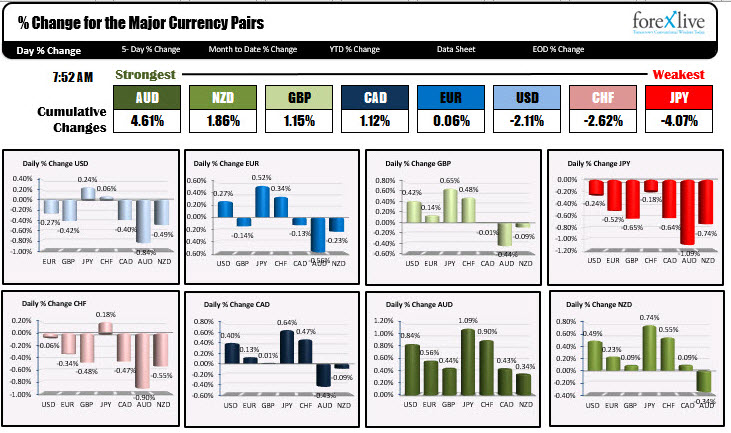 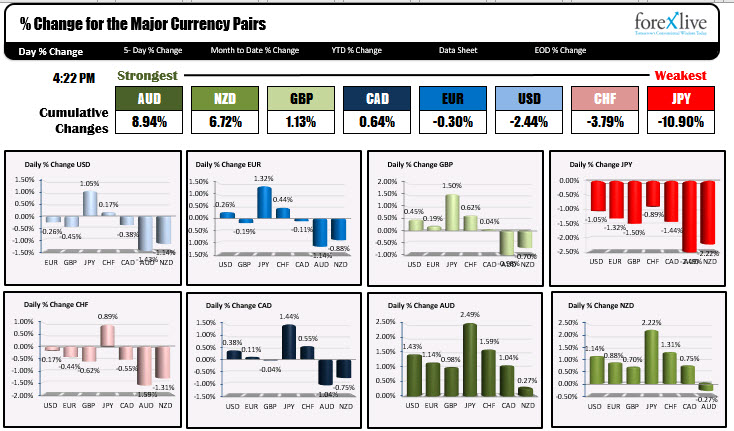 The movements in the currencies followed a "risk on".  Fundamentally, the market continues to price in a recovery from the coronavirus. That is helping pairs like the AUD, NZD and GBP, and hurting the safe haven currencies like the JPY, CHF and USD.  The JPY crosses also tend to do better in a "risk on" environment.
Taking a look at some individual pairs a look at the technicals are showing: