It is hard not to start with something like "the NASDAQ and S&P closed at record highs" when you want to focus on the moves in the forex market. However, when each day sees a another 1% or so higher in the NASDAQ/S&P, and records continue to be broken day in and day out, it's hard not to acknowledge the numbers.

The catalyst for the day?

The US ADP employment estimate should not have helped. It rose by 428,000 new jobs but that was well below the 1 million expected. On Friday the more followed Labor Department jobs report will be released with expectations for a 1350K vs. 1763K last month. The ADP report for July came in at 212K. The disconnect between ADP and the Labor Department numbers may be the reason for the run higher in stocks.  Why follow something when it is not doing a good job of reflecting the true employment picture (or so it seems?).

July factory orders in the US came in a bit better-than-expected 6.4% vs. 6.1%. The durable goods orders were also revised marginally higher from the preliminary report from the week or so ago.

Fed's Mester called the US recovery fragile, but with the new framework for inflation and monetary policy, even if the economy rebounded, the Fed will likely stay on hold for years until inflation averages over 2% for an extended time period.  If the economy falters because of his fragility, the Fed will continue to pump liquidity.

In the forex market, the US dollar started the day as the strongest of the major currencies. By the end of the day, it gave up that distinction to the Canadian dollar - despite lower oil prices for the day (Crude oil fell by $-1.15 or -2.69% to $41.61).

The greenback was still higher vs. most of the majors (the CAD and the NZD were the exceptions) and was higher earlier in the session before an afternoon sell off into the close. 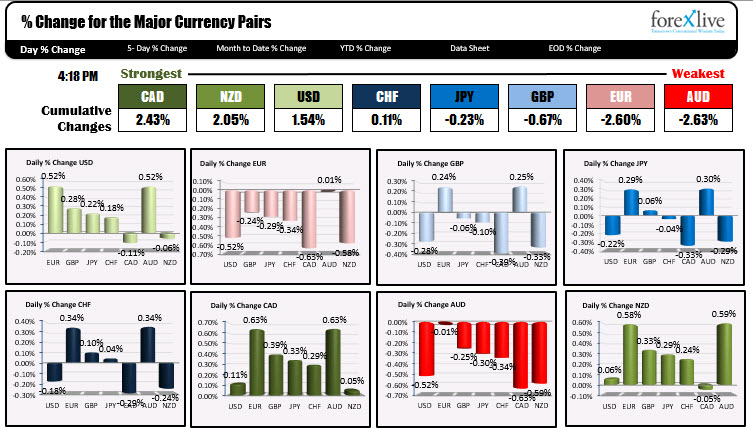 A look at some of the technicals of the major pairs are showing:

AUDUSD: The AUDUSD was the weakest currency coming into the New York session and dipped to a new session low at 0.7300 in the morning session. However the last 7 hours saw the price call back some of the days declines. The current price is trading at 0.7336 into the close. It's 100 hour moving average is above at 0.7348. If the price can remain below the 100 hour moving average in the new trading day, the bears would remain in control. Move above and could be some further buying momentum.

USDCAD: As mentioned the CAD was the strongest of the majors despite the sharp decline in oil prices. Then again the larger than expected drawdown of oil inventories should have sent the price of oil higher instead and that typically supports the loonie. So maybe, forex traders were simply ignoring the oil price action. Anyway technically, the price of the USDCAD tried to trade above its 100 hour moving average. On 6 separate hourly bars, the price moved above that moving average level (currently at 1.3065), but momentum faded on each attempt. The pair closed near the lows for the day (currently at 1.30422). In the new trading day stay below the 100 hour moving average keeps the bears more in control.