A snapshot of other markets into the close for the week:

The price of bitcoin is heading into the weekend on a bearish note. The price is trading down around $4300 or -10.75% at $35,740. The low price today reached $35,231.99. The high price was up at $42,275.99.  The low price heading into the weekend saw the digital currency for all the way down to $30,000.  The price is closing below its 200 day moving average around $40,052, after rebounding and closing back above that moving average during yesterday's trading.
The USD today rose after better service sector PMI. The Markit Service PMI (P) for May came in at 70.1 versus 64.4 estimate. The manufacturing PMI also was better at 61.5 versus 60.2. Both measures were records going back to the series start in 2009 (the composite index was also at a new record).  Although prices hit a record, so did new orders for both manufacturing and service. Backlog  orders were also at a record level.  The chief economist at IHS Markit commented that "The US economy saw a spectacular acceleration of growth and May". However he also warned that businesses been "constrained by supply shortages and difficulties filling vacancies" and that average selling prices for goods and services are both rising at "unprecedented rates".
Fed's Barkin, Harker and Bostic participated in a Dallas Fed virtual event.  Each of the Fed officials kept true to their recent slants with Dallas Fed's Kaplan being the most interested in looking to taper sooner rather than later. However, each were also cautious and are content to wait to see more data.
The USD got a boost off the comments and also the flight into the dollar on the decline in bitcoin.  That helped to lift the USD to the top spot as the strongest of the major currencies for the day. The AUD and NZD were the weakest today. 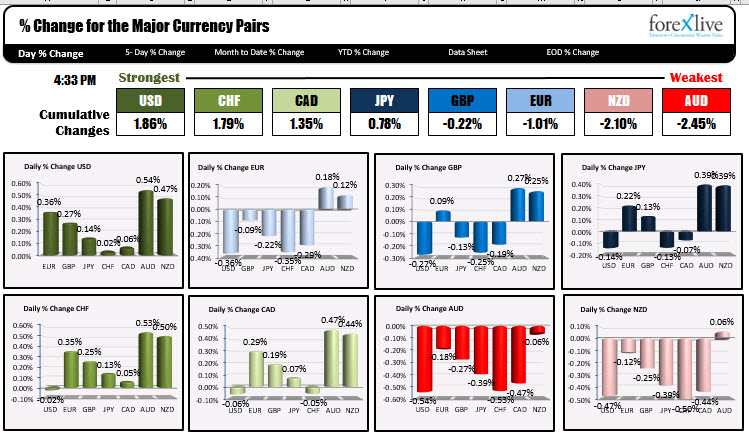 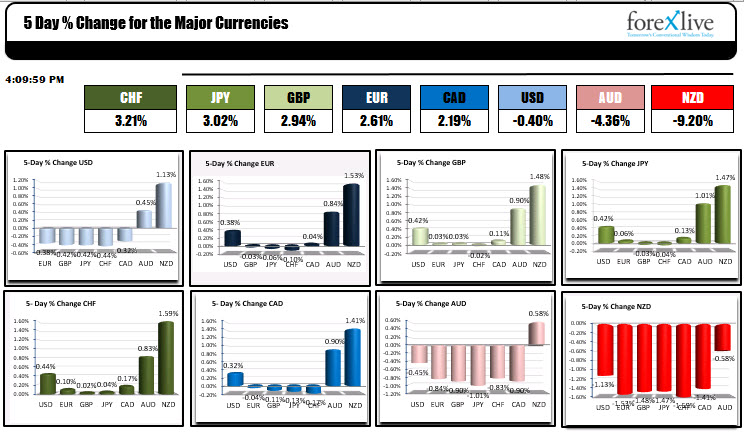 In the European debt market this week, 10 year yields were lower across the board the town 10 yield fell 3.9 basis points German tenure yield smart near unchanged.

In the US stock market today, the NASDAQ index fell by about -0.5%. The Dow rose by 0.36%. However, for the week, both the S&P index and Dow were lower, while the Nasdaq had a modest rise after four straight weeks of declines.