Although the UK Speaker of the House Berkow blocked a vote on the UK Prime Minister's Brexit deal today. However at approximately 1700 GMT, the legislators will vote on Withdrawal Agreement Bill, which will enact Johnson's deal.  The vote will be a test on whether the Brexit plan will pass the House of Commons, but it does not mean that it won't be amended through the House this week.   If done, that could lead government to withdraw the legislation instead of implementing it.

Over the weekend, the PM sorta, kinda sent the letter to the EU asked for an extension past the October 31 end date (to January 31). The EU is sitting tight until the political votes on the legislation is voted on.

What we know is the first test will take place at 1700 GMT (2 PM ET tomorrow). That is when the rubber will meet the road, but it is not the end of the road (or the process).  So stay tuned.

Other than that, the markets had little news other than some comments from Kudlow and Trump on how the trade deal was progressing. Pres Trump said that China was already buying some agricultural goods and that in some ways, the Phase II had lower hurdles than Phase I. I find that hard to believe, but having fits of optimism, is nothing new from the President. Kudlow said that if Phase I talks go well, the December tariffs could be taken off.   Again, hopeful comments that are not much of a surprise, especially from Larry Kudlow.

In other markets today, the US stocks took the good news on Monday and rallied stocks although the Dow lagged on the back of downgrades for Boeing. The embattled airplane manufacturer will report earnings on Wednesday.  The Nasdaq and S&P had solid gains today. THe European shares also closed higher on the day.  Below is a graphical summary of the % high, low and close changes for the major North American and European stock indices. The Nasdaq rose 0.91% on the day. The smaller cap stocks in the Russell 2000 rose by 0.95%.

In the US debt market, the yields rose by 4 to 5 basis points in more or less a parallel shift of the yield curve higher.

In the forex market, the NZD, CAD are ending as the strongest of the major currencies. It is election day in Canada. The markets were modestly supportive of the loonie ahead of the results. The weakest currency was the EUR and the JPY with most of the declines in each coming vs the risk on currencies like the CAD, AUD and NZD.  The USD was mixed in trading today with gains versus the EUR, GBP, JPY and CHF and declines vs the CAD, AUD and NZD. 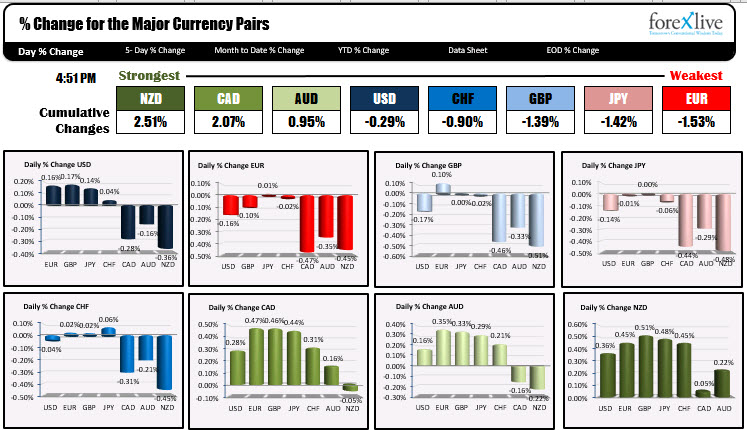 Some key technical levels in play for the new trading day: