The news today came out of the Bank of Canada. They kept rates unchanged but had a more dovish view going forward. They said:
Moreover, they removed description of key rate as 'appropriate' and said that:
Admittedly in the press conference Gov. Poloz toned down the dovishness saying:
The USDCAD surged on the headlines (regardless of the less dovish comments at the press conference).  In the process, the price moved above the high from January at 1.3101 and the 200 bar moving average on the 4 hour chart at the same level.  The high price extended to 1.3152 before backing off a bit into the close. We currently trade at 1.31349. Going forward staying above the 1.3101 level will keep the buyers more in control. On the topside more momentum will have to deal with the 100 day moving average at 1.3181.  The last traded above its 100 day moving average on December 11. The level also corresponds with the 61.8% retracement of the move down from the November high  (that is at 1.3183).
In other news today the Chicago Fed national activity index, a compilation of 85 different economic indicators, fell to -0.35. That was worse than the 0.13 estimate. However, the index tends to be revised since nearly half of the inputs have not even be released yet (they plug-in estimates).
Also, in the US existing home sales came in much stronger than expectations as supply issues remain a big problem. The month supply fell to 3.0 months from 3.7 months in the last report. The lack of supply is pushing up prices and making affordability difficult - especially for new buyers.
Although the coronavirus fear ebbed in trading today, the number of deaths have increased to 17 (from 6 yesterday). The WHO will make a decision tomorrow as to whether to declare the virus an international emergency. If so, that may get the attention of the markets once again.
US stocks today closed mixed with the S&P near unchanged with a small gain, the Dow near unchanged with a small decline and the Nasdaq up marginally.  Although mixed, the major indices are closing near the lows for the day, giving up decent gains in the process.  European shares also closed their session near lows after trading higher earlier.

Looking at the snapshot and rankings of the strongest to weakest currencies today, the GBP was the runaway strongest. The currency continue its move to the upside following the better jobs report yesterday.  The CAD was the the runaway weakest of the major currencies.  In fact if you look at the % changes of the major currencies vs the USD, apart from the changes of the GBP and CAD, the other changes were within 0.10% of the closes from yesterday. 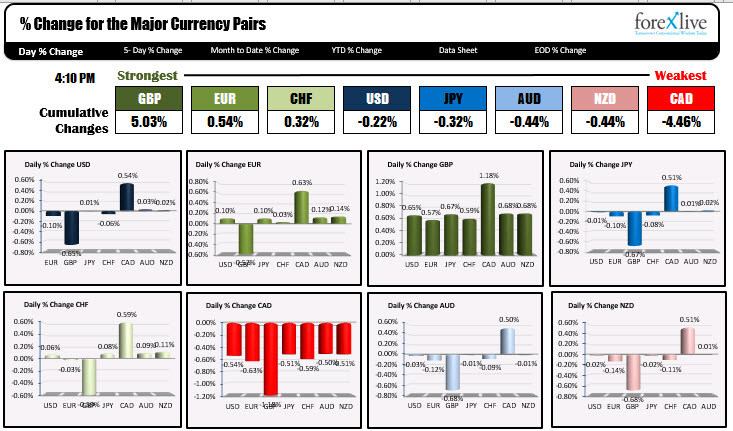 Some technical comments:
Good fortune with the trading.