Forexlive Americas FX news wrap: US data not as bad as expectations

The US has some post coronavirus data come out today with durable goods orders and University of Michigan sentiment index both released.

The durable goods orders showed a sharp -14.4% decline for the month of March. However if you take out transportation, the decline was only -0.2% versus -6.5% estimate. Moreover durable goods orders nondefense ex air actually rose by 0.1% versus -6.7% estimate, and capital goods shipments nondefense ex air fell by a modest -0.2% versus -7.0% expectations. The combination should make 1st quarter GDP better than once thought. The problem is how those numbers hold up in April and through the 2nd quarter.

The other data point today came from the University of Michigan final sentiment index for the month of April. The preliminary number came in at 71.0. The expectations was for a lower reading at 68.0. The actual number showed an advance to 71.8.  Current conditions also increased to 74.3 from 72.4.  Expectations were near unchanged at 70.1 versus 70.0.

So overall, the data came in a little better-than-expected.

How did that impact the market?

The stock market ended up grinding higher on the day.  Of course, it wasn't just the data points from durable goods and sentiment. Some was simply a better feeling for the future post coronavirus world.

New York numbers continue to show some improvement. France deaths rose by the fewest in 4 weeks. The Italian death are at the lowest in 5 weeks although number of new cases continue to be stubbornly high at over 3000.

The market also has fingers crossed that the planned reopenings in states like Georgia do not lead to a big step backwards.

Tim Cook of Apple apparently predicted to Pres. Trump that there would be a V-shaped recovery.

Pres. Trump  also threw out ideas that they could help the airline industry by buying four to five years' worth of plane tickets in advance at a discount to inject struggling U.S. airlines with money, and along those same lines, take stakes in energy companies as a way to support that industry.  When the government has unlimited pockets, what's the downside - even if it smells more and more of big government with socialistic undertones.  PS the government deficit is expected to belong to $3.7 trillion.

In any case, "hope" is the word that traders are focused on, and that helped to send some flows back out of the safe-haven dollar. The greenback fell against all the major currencies with the exception of the Canadian dollar. Overall, the EUR was the strongest on the day and the CAD was the weakest. 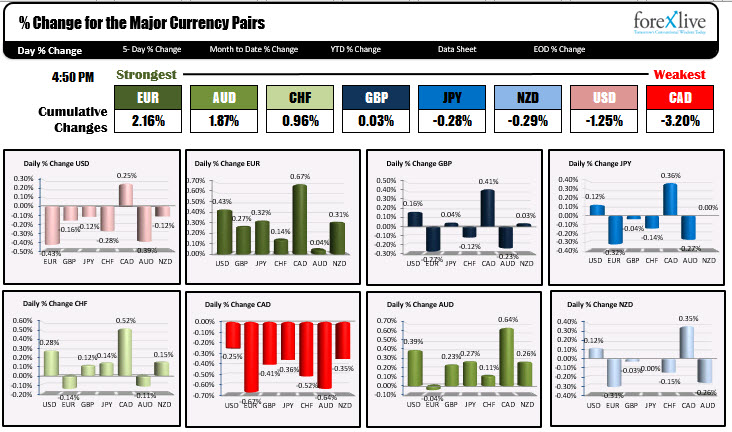 US stocks were also purchased with the 3 major indices moving higher (not surprisingly) led by the NASDAQ index up 1.65%. European shares today did not fare as well with all the major indices will below the 0.0% line:

For the week however, the major US indices all declined led by the Dow industrial average at -1.93%. The S&P index fell by -1.32% while the NASDAQ index was near unchanged for the week at -0.18%.

Some technical levels that are in play as we end the week and look forward to next week's trading:

Wishing you all a safe and joyous weekend.