US June Durable goods orders surprise to the upside with and 11.2% gain vs. 4.7% expected. The data may have been influenced by higher defense aircraft parts (up 77%). But the other break down including ex transportation, capital goods orders nondefense ex air, and capital goods shipments nondefense ex air also be estimates. Moreover revisions were higher. So overall report was solid.

US stocks open mixed with the Dow industrial average down, the S&P near unchanged, and the NASDAQ index higher. By the end of the day all 3 indices closed near their highs for the day, with the NASDAQ index leading the charge with a 1.73% gain. That index is up 30.0% on the year. The S&P index also gained over 1% (up 1.02%). Both the NASDAQ and the S&P closed at record levels and made new all-time intraday highs once again.

The Dow industrial average lagged but still rose by 0.3%. In the process, the index got within 1% of the 2019 closing level.

European shares also closed higher with the German DAX leading the way with a near 1% gain on the day below is a summary of the ranges and changes for the major stock indices in Europe and North America.

In the forex, risk on flows helped to propel the NZD and AUD higher, with the NZD by far the strongest of the majors. On the downside, the CHF, EUR and USD fought each other for the weakest of the majors with the CHF winning that race. Below is a ranking of the major currencies along with the percentage changes of each currencies vs. each other. 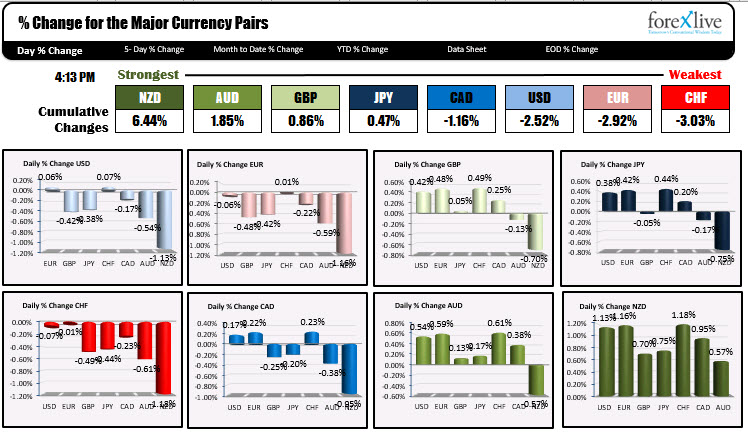 From a technical perspective:

As a summary, in other markets today:
In the US debt market, the US treasury successfully auctioned off 5 year notes with a -0.9 basis point tail and a strong bid to cover ratio. That helped to bring down rates off there intraday high levels today.

Tomorrow at 8:30 AM, the US initial jobless claims are expected to show a 1 million gain for the week. That comes off a 1.106 million gain last week. The US advance goods trade balance and personal income/personal spending. At 9:10 AM ET Fed chair Powell will be speaking at the virtual Jackson Hole symposium. Focus will be on whether the chair foreshadows a change in inflation guidelines to a average inflation target. At 10 AM, the University of Michigan final sentiment reading for August is expected to come in at 72.8. That is up slightly from the 72.5 in July.