Today saw more up and down activity as a result of the mixed signals from the coronavirus. Whereas, the numbers of infected seem to have peaked in China, the numbers around the world are moving higher.

The question now is how entrenched is a virus outside of China, and the impact economically. If the virus does take off even more in Europe and the US, and schools are closed, people quarantined, the service economy shuts down, the US economy could be hit hard. At the moment however, the risks still seem limited.

Nevertheless, in the New York session, the market got a scare when Nassau County in New York reported that there was 83 possible candidates being monitored for the virus. Minutes later, the New York governor said there were 27 possible virus cases being explored. Is it 83, or is it 27, or is it some other number?  If the US officials are trying to be transparent, they are not being too successful. This evening at 6:30 PM ET, Pres. Trump will will hold a press conference with the CDC. The president was angered by the CDC press conference yesterday where officials said that "it was not if but when" that the virus took off within the US borders.

Regardless, the news helped send stocks into the red after being higher for most of the day. However by the close, although the S&P and the Dow industrial average closed in the red, the NASDAQ recovered and eked out a modest gain.   Below are the ranges and closes for the major indices in both North America and Europe. Whereas in Europe the indices closed near session highs (after moving lower first). In the US, the major indices close near session lows after moving higher.

In other markets, a snapshot is showing:

In the forex market, the EUR it is ending as the strongest of the major currencies followed by the US dollar. The AUD and GBP are the weakest. Both the AUDUSD and the GBPUSD are closing near the session lows. 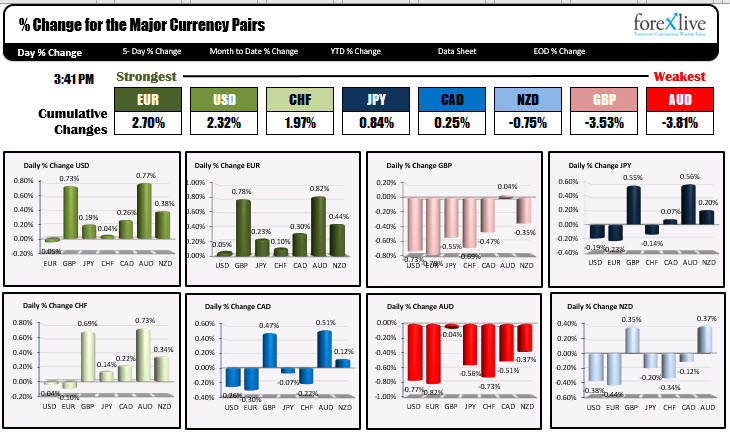 Him
For the AUDUSD it is trading at its lowest level since 2009. In the move lower today, the pair cracked below the swing lows over the last few days between 0.6582 and 0.6586. It would take a move back above that area in the new trading day to tilt the bias a little more to the upside. Absent that, and the sellers remain in firm control
For the GBPUSD , it trended below its 200 hour moving average and 100 day moving average (both currently around 1.2958). In the New York session the price trade above and below its 100 hour moving average (currently at 1.29395) but could not close an hourly bar above that moving average level. The price rotated down toward new session lows in the New York afternoon session with a low price coming in at 1.2899 (call it 1.2900).  In the new trading day, a move below the 1.2900 level will have traders looking toward the double bottom from Monday at 1.2886. Below that level and traders will start to look toward last week's low at 1.28477. If the price is to move higher from here, a move back above the 100 hour moving average would be a step back in the bullish direction. The price action in the pair has been going through volatile ups and downs on a daily basis. As a result anything is possible. Keep a high on the technical levels for clues.
The fall in oil prices, did help the USDCAD move to the highest level since October 2019 (lower CAD). The move to the upside took out swing highs from November and February at the 1.3328 area. The problem with the break was that the price could only extend to 1.33324 (4 to 5 pips above the November and February high), before rotating back to the downside. The price is currently trading at 1.3313.  In the new trading day would take a move back above the 1.3328 level, to solicit more buying interest