The hope is the reopening of the global economies leads to increases in those industries hit hardest during the crisis and an overall return to normal economic levels.  Having said that Fed's Bullard said today that he sees the unemployment rate "below double digits" by the end of the year.  Then again, Bullard back on March 22 said that the US jobless rate may soar to 30%. So he can be off in his assessments. 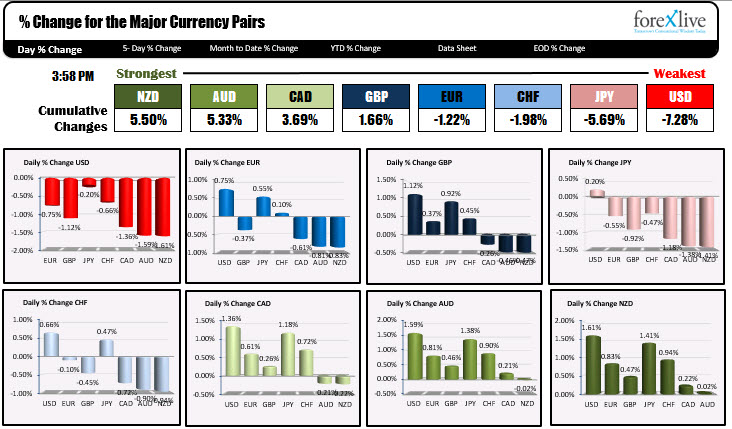 Given the redistribution of funds into the general industrial industries, the tech heavy Nasdaq was up only modestly, while the largest flows went into the 30 Dow stocks  Leading the Dow stocks were the financials. Goldman Sachs rose by 9%, Bank of America rose by 7.2% J.P. Morgan rose by 7.1%. Industrial companies like Boeing, up 5.24% and Caterpillar up 4.36% were also strong gainers today.

Overall, the NASDAQ and S&P index ended near session lows (a late day report port about sanctions against China also helped contribute to the weaker end to the trading day).

WTI crude oil futures continued its run to the upside, however, with a gain of $1.02 or 3.04% to $34.26. As global economies reopen and workers at back to offices, the demand for energy products should start to sap why some of the excess supply.  In addition OPEC+ countries will be doing their part in limiting production. In the US the number of rigs continued its downward spiral last week and as a result will limit the supply of domestic oil.

Some technical levels of importance for the major currencies going into the new trading day: