Forexlive America's FX news wrap: The USDJPY is one of the bigger movers today as traders sell JPY

The economic data today showed housing upbeat with Case Shiller home prices continuing to show solid gains and February FHFA home prices also up on the month by a solid 0.9%.  Consumer confidence reached the highest level since the first quarter of 2020 with a strong reading of 121.7. That was much higher than the 113.0 expectations. Richmond Fed manufacturing index came in unchanged from the previous month but lower than the estimate (17 versus 22 estimate).

The US treasury successfully auctioned off $72 billion of 7-year notes near the WI level (0.1 basis point tail) with bid t to cover higher than the six month average, and the dealer saddled with less than six-month average (indicative of strong external demand.

A look at some of the markets near the closes shows: 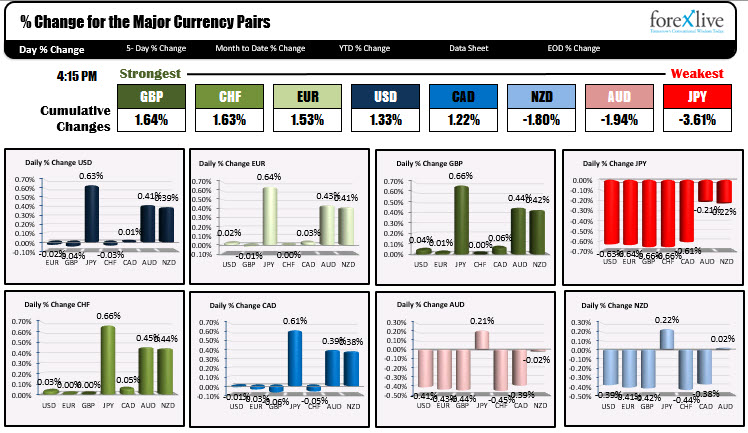 Looking at some of the technicals:
In the stock markets in North America and Europe, the S&P and NASDAQ could not repeat the record closes from yesterday with each moving lower on the day. The NASDAQ was the biggest decline or at -0.34% of the major US indices. The S&P index turned negative at the closing bell (-0.02% on the day).  The Dow industrial average close with a small gain of 0.01%.
The European stock indices all closed lower with the exception of the Spanish Ibex which had a gain of 0.63%.  Below are the details of the highs and lows and percentage changes in price changes for the major North American and European stock indices.