Today saw the US consumer confidence remain upbeat in the US with a reading of 135.1. That may have been lower than the lofty 135.8 last month, but well above the estimate of 129.0.  The present situation moved to 177.2 from 170.9 last month. Although the expectations fell to 107.0 from 112.4, it is still relatively high and given all the trade uncertainty and global issues, it is not surprising there is a dip. Overall, however, with the consumer representing 65-70% of the US economy, it seems recession fear are overblown.
That is the good news. The not so good news today is that the bond traders don't seem to believe it.   Yields moved sharply lower once again with the yield curve inverting more. The 2-10 spread is at negative -4.62 bps and the 3 month to 30 year spread went inverted as well.

Although there are other circumstances (like lower global yields) that are leading to a global shift lower in US rates too, the inverted yield curve IS saying recession is coming.  How this all works out is anyone's guess, but the data and the markets are still a confused.
US stock indices today showed it's confusion as well. After opening higher, the indices moved lower as the yields moved lower and lower.   Those losses were reversed with stocks clawing back toward unchanged with an hour to go. However, momentum stalled again and the indices moved lower into the close.  Up and down, up and down.  European shared closed mostly higher today.

In other markets,
In the forex, the GBP is ending with the GBP the strongest.  PM Johnson spoke with EU Juncker and went with new ideas.  I can't say that there was any compromise, but the GBP was encouraged (or the price action showed that).  The JPY was also stronger on the day.   That is indicative of "risk off' flows.
The NZD the weakest.  The CAD and AUD were also weak ("risk off").  CAD was weaker despite surging oil 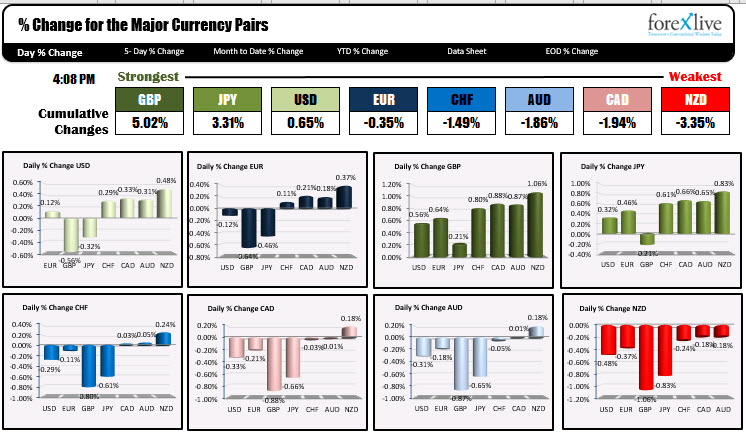 Technicals for some pairs.