Today, there was a lot of focus on markets like silver and gold, Bitcoin and the continuation of dollar selling.

In the forex market today the dollar continued its moved to the downside trading at the lowest level in over 2 years. The greenback was the weakest of the major currencies. The EUR was the strongest. 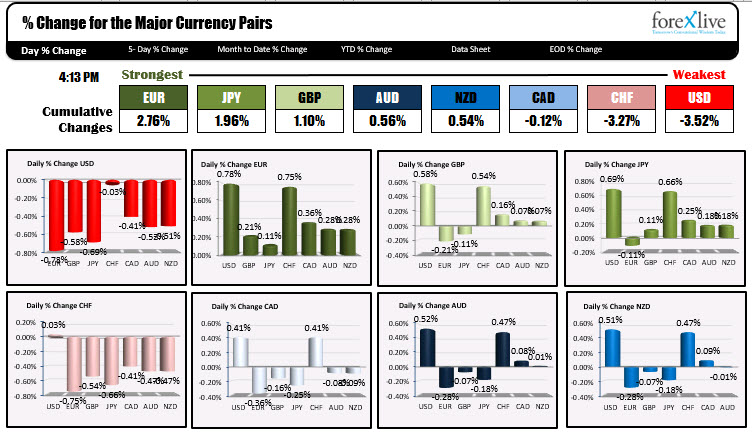 A look at some of the major currency pairs shows:

Fundamental news today included June preliminary durable goods orders which increased by 7.3% vs. 7.0% expected. Dallas Fed manufacturing index for May came in at -3.0 but was greater than the -4.9 expected.

Toward the end the day the Republicans announced their plans for the 4th coronavirus stimulus package. Including money for schools ($100 billion), a $1200 stimulus check, a $200 emergency unemployment benefits (down from $600), more funding for PPE.

The FOMC will announce her next interest rate decision on Wednesday. Chairman Powell speak after the decision.

Also this week are a plethora of earnings including AMD, McDonald's, Pfizer, Starbucks, Boeing, Shopify, Facebook, PayPal, Amazon, Apple,Alphabet, MasterCard, AstraZeneca, Exxon Mobil and Caterpillar. That's a a lot of companies with varying stories over the current quarter.  Make a misstep like Intel last week, and the stock can be punished. For the high flyers like Amazon, Apple, Shopify in what is a down year for the S&P and Dow, the market may not be too kind if there is a miss.