Leading the way in the ISM data was forward-looking new orders which rose to 61.5 from 56.4 last month. The estimate was for a rise to 55.1. Production also rose smartly with the index rising to 62.1 from 57.3 last month. New exports and import orders also increased.

Troubling was that the employment component remains well below the 50.0 level at 44.3. That was higher than last month 42.1 but still signaling a contraction in employment.

US nonfarm payroll will be released on Friday with estimates around 1.5 million new jobs. That is still much lower than the 4.8 million jobs created last month. Goldman Sachs is even lower at 1 million jobs as the threat for a 2nd wave of the coronavirus started to reel its ugly head over the last month or so.

Nevertheless, the ISM data did help propel stocks even higher. It did get off to a good start as the president seemed to give the blessing for Microsoft to pursue purchasing TikTok and despite the troubles in passing a new coronavirus stimulus bill, we all know, words like "we are still far apart"eventually lead to an agreement has been made.  The GOP still remains a $1 trillion, while the Dems are pushing for $3 trillion.  That stage is the "We Won" title.  Who wants to bet that 2 trillion is number.

Fed governors started to speak again after the traditional quiet before the FOMC decision (that occurred last Wednesday). Fed's Kaplan sees a muted rebound from here. Fed's Barkin is cautious about the economic momentum going forward as a result of the restarting of the virus. Even Fed's Bullard – who goosed the market last month after saying he would be surprised to see 8% are lower unemployment rate by the end of the year - started his back track by saying that the virus has been more persistent than the thought it would be.  When Bullard thinks too much, he tends to get in trouble.

In the forex market, the CAD his ending the day is the strongest of the major currencies. The CHF is the weakest.  The USD close higher but only marginally vs. most of the currency pairs. The one exception would be the Canadian dollar where it lost -0.2% against the loonie.  The greenback was the strongest 1st the Swiss franc by 0.53% but closed off its highs. 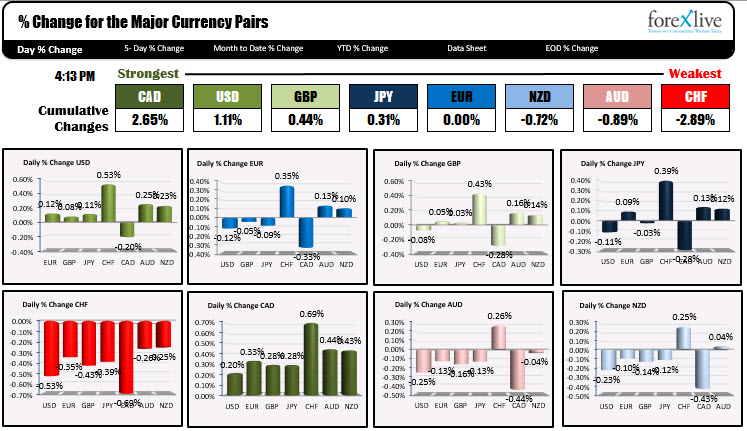 Some technical levels for the new trading day:

GBPUSD: The GBPUSD  -  like the EURUSD - fell into the early New York session and tested its 50% retracement of the move up from the July 28 low at 1.3003. The 100 hour moving average is near that level and the price traded above and below its for about 5 hourly bars before moving back to the upside over the last 6 or so hours.  The 100 hour moving average currently comes in at 1.3039 and a move below in the new day would be more bearish..  On the topside traders will be watching the 1.3100-046 area as topside resistance.  Move above increases the bullish bias.

In other markets for the day: