In other markets near the end of day:
Today, the economic release calendar was bare. There was not a single US or Canadian economic number released.
Nevertheless, the day was not without its excitement and Pres. Trump provided that catalyst. While attending NATO meetings in London, he commented how the US and China may not reach an agreement until after the next election, saying "I have no deadline.  In some ways I like the idea of waiting until after the election for the China deal"
Later, after France's president Macron said that NATO was experiencing a brain death, Pres Trump call the comments "insulting to a lot of different forces" and that the comments were "nasty".
The president is also annoyed with France's proposal for a 3% tax on tech companies including US's Facebook, Google and Amazon. The counterpunch was that French wine and champagne could face 100% tariffs and you can add Brie and other cheeses to the list as well.
All that, helped to weaken stocks at the opening and send stocks even lower in morning trade.  However, an afternoon rally helped to a race most of those declines although major indices still fell for the 3rd day in a row and had the largest decline since October 8.
A look at the numbers show:
The US stock market was not the only market that saw sharp moves. The US debt market so yields tumble by as much as 11 basis points on flight to safety and expectations for slower growth given trade concerns with China and the EU/France.
Looking at the changes for the day, the 2 year yield fell by 6.8 basis points while the 10 year fell by -11.0 basis points. The 2 to 10 year spread narrowed by about 4 basis points from 21.89 to 17.68 basis points. 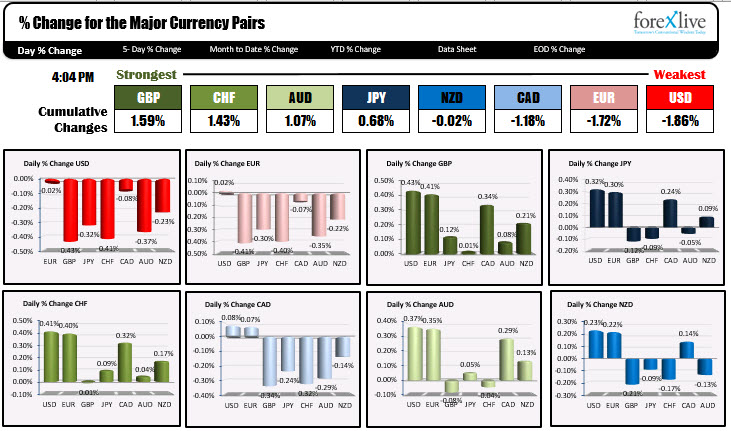 The GBPUSD was the biggest mover with a rise of 0.43% on the day.  That move sent the price up from yesterday's closing level of 1.2938 to a high price of 1.30107. The high price was less than a pip from the October swing high of 1.30116. The pair is closing just below the 1.300 level at 1.2997. In the new trading day if the GBPUSD is to extend higher, getting above the October high at 1.30116 is the key target. The longer it takes to extend above that level, the greater chance that sellers leaned against the level and overwhelm the buyers.
The EURUSD is ending the day little changed after it's modest run to the upside stalled just above a swing area at 1.1089 to 1.10924. The high price reached 1.1093 and reversed into the close. The good news for the euro from the bullish side is that the pair stayed above its 100 day moving average at 1.10695. So there is a bit of a battle going on at that 100 day moving average and the swing high at 1.10924.
The USDJPY did move higher early in the day on stronger stocks, but when Trump started talking about trade issues with China, those gains were quickly erased and the price of the pair started to run lower. A catalyst from a technical perspective was the breaking of the 200 day moving average at 108.87. The price continued its fall lower and did not stop until reaching the swing low from November 22 at 108.474. The price is going out at 108.63, between those 2 technical levels. In the new trading day resistance at 108.87 and support at 108.47 will be the risk defining levels.
The USDCHF fell sharply for the 2nd consecutive day. Since peaking at 1.0022 on Friday, the price has fallen by 166 pips to a low today of 0.9856. An afternoon rally has taken the price back up to 0.98727. A key technical level into the new trading day is its 100 day moving average at 0.98854. Today the price fell below that level and stayed below for the entire New York session. If the buyers are to take back control, they would need to extend the price back above that 100 day moving average as the minimum.
The economic activity in the New York session starts to heat up tomorrow with the ADP employment report and the Bank of Canada interest rate decision. The data will moved to a crescendo on Friday when both the Canadian and US employment reports will be released.