ADP started the day off with better-than-expected job growth of 174K vs. 50K expected. That would bode well for the Friday employment report which is expected to show a gain of 62K. That report will be released at 8:30 AM ET on Friday. Canada's employment report will also be released on that day.
The gain helped to push yields higher again in the US. The 30 year yield move to the highest level this year and the highest level going back to March 2020. It is ending the day up about 5.7 basis points to 1.926%. The 10 year yield is also higher with a gain of 4.3 basis points to 1.139%. With the move higher in yields, so too has the yield curve steepened. The 2-10 year spread is now up over 100 to 102.20.

In the forex market today, the NZD is ending the session as the strongest of the majors followed closely by the AUD. The GBP is the weakest. Those currencies were in the same order at the start of the NY session.  Both the NZD and the AUD extended their gains modestly in the NY session.
The USD is ending with mixed results. The greenback fell vs. both the Ozzie and New Zealand, were near unchanged levels verse the JPY and CAD, and had modest gains vs. the GBP, CHF, and EUR. 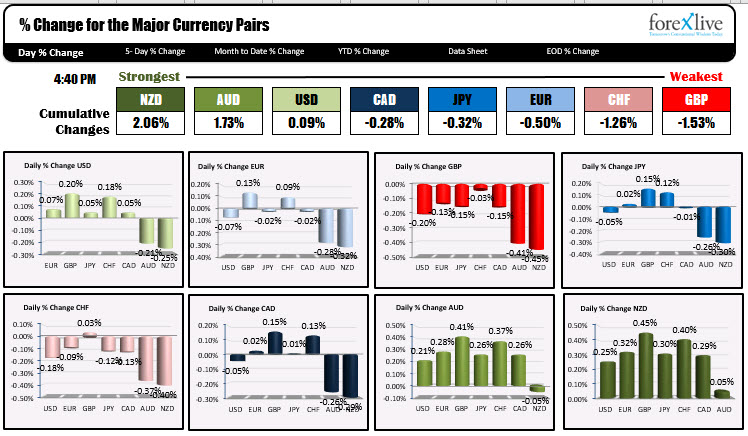 Some technical levels to high into the new trading day:
In the equity markets today, the major indices are ending the session with mixed results. While the S&P and Dow industrial average at small gains, the NASDAQ index had a small loss and snapped a today winning streak. In Europe, most of the major indices closed higher for the 3rd consecutive day this week. The UK FTSE 100 was the exception. France's CAC closed near unchanged.
Below is a look at the percentage changes in ranges for North American and European indices: