A snapshot of other markets as North American traders look to exit for the day are showing:

US stocks once again rose sharply. The rotation into the lagging Dow 30 stocks with Boeing leading the way, led to that index doing the best. The Dow rose by over 2.05%. The S&P index rose by 1.36% and the NASDAQ lagged with a gain of 0.78%.
European forces also increased with Germany leading the way for the 2nd straight day (and enjoying +3% gains on each day). The German DAX rose by 3.88%.  Below are the percentage changes and percentage ranges for the major European and North American stock indices today.

In the US debt market, yields continued to move to the upside with the yield curve steepening. The 10 year yield rose by 6.7 basis points while the 2 year rose by a lesser 3.0 basis points. The 2 – 10 year spread extended to 56.05% from 52.29% at the close yesterday.  The 10 year yield reached the highest level since April 14 in trading today.

Fundamentally in the market today, the ADP employment report - a precursor for the US jobs reports scheduled to be released on Friday at 8:30 AM ET - came in much better than expectations even though job losses totaled more than -2.7 million on the month. That still was much better than the -9 million job loss expectations. Economists were left scratching their heads as the numbers don't necessarily square up to the initial claims figures which have shown a cumulative -40.8 million jobs lost since the Covid crisis started in March. In April, the ADP report showed a decline of -19.557 million.
In other economic data factory orders for April came in near expectations of -13% and the ISM nonmanufacturing index for May can better-than-expected at 45.4 vs. 44.4. So although in contraction it was still a touch better.
The Bank of Canada kept rates unchanged as per expectations but scale back some market operations.  The bank as already said that the rate of 0.25% would not go any lower. The commented that the worst case scenario from the April Monetary Policy Report has been avoided. There are still risks but the worst seems to be over in the bank is willing to provide more liquidity in support (sans a rate cut) if need be.
A snapshot of the forex market's winners and losers showed the NZD is the strongest of the majors, while the JPY and USD are the weakest. 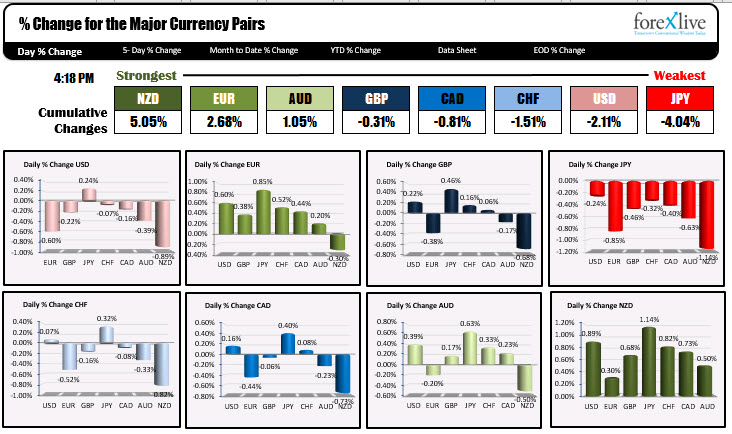 Some technical levels to watch in the new trading day: