In the US stock market today, the major indices are closing with decent gains, but off the highest levels.  Both the US and European markets closed with higher levels

The low is a snapshot of the percentage highs and lows for the major North American and European stock indices: 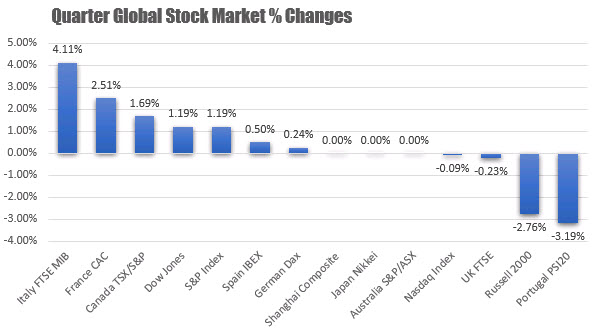 In the US debt market today, the yields are ending down after being up earlier in the session. The yield curve defined by the 2 - 10 year spread is little changed on the day.

The price of gold tumbled lower in trading today (it is down -$24 currently) helped by:
The price of gold also broke a head and shoulder line and fell below the 50 day MA for the first time since June.
Now admittedly, there was little in the way of economic data in the New York session today to give much of a story to the dollars rise/or golds tumble for that matter.  In fact, the moves may be attributed to month end/quarter end rebalancing.
On the economic front, the Dallas Fed manufacturing activity index for September did coming better-than-expected at 1.5 versus 1.0 estimate. However that was off the 2.7 level from last month.

In addition to that better release,according to twitter and other news outlets the Chicago PMI was weaker at 47.1 versus 50.0 estimate and 50.4 last month. So overall, there was a little good and a little bad from the economic data today.

Looking at the strongest and weakest currencies for the day (see the charts and rankings below), the CAD is ending as the strongest of the majors thanks to a 0.77% rise in the CADCHF and a  0.59% gain in the CADNZD. The CAD was little changes vs the USD. The GBP also was stronger today  but also closed near unchanged vs the USD. 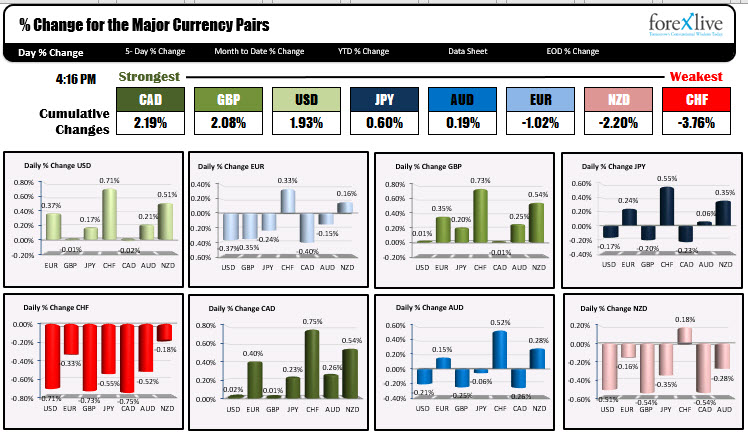 The CHF  started the day as the weakest currency and  extended that bias in the North American session.

Some technical thought for some of the major currencies: