There was not a lot of news in the NY session. The US factory orders data for September was released and it showed weakness. It came in at -0.6% vs -0.4%. That data was precluded by the durable goods preliminary data that was released on October 24th. At that time, the preliminary was weaker than expect at -1.1%

Today, the durables data was revised lower at -1.2%. In addition, the details of the data pointed to lower GDP and lower business spending as well.    You can blame the China/US trade war.

Despite the weakness, the forex market shrugged off the data (instead focusing on the hopes for a deal)  and continued what was a positive tone inherited from the Asian and London morning session.  Those gains were spurred on by hopes that US/China phase I as progressing to signing shortly. 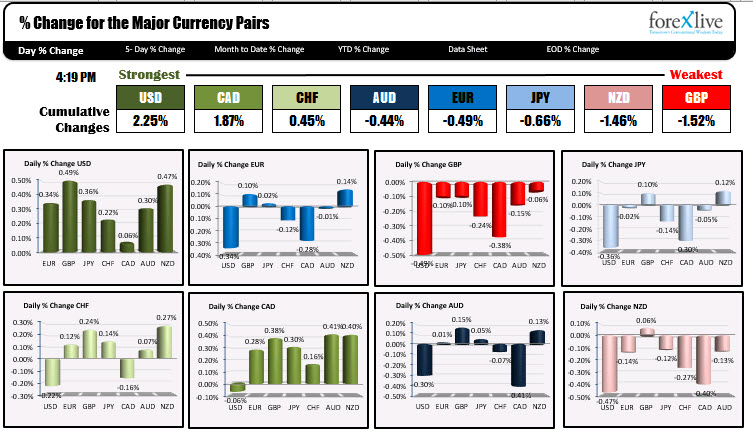 In addition to the USD moving higher, the US stocks also continued it's move higher. Today, all three of the major indices closed at all time record highs. Last week the Nasdaq and S&P ran higher. Today, the Dow joined in the bullish, record breaking party.

Although higher, the major indices did come off the session highs. Below is a table showing the high, low and close % changes for the major stock indices in North America and Europe.

In Europe, the benchmark 10 year yield were also higher but by less than the US 10 year (supportive to the USD).   France's 10 year which along with the German 10 year, remains in negative territory, but only by 4.3 bps.    Does it get back above the 0.0% this week?  Traders will be eyeing that yield and it may give bond sellers (higher yields) some additional nudge.

Some technicals into the new day: