With yields lower in the US after the strong employment report last week, the moderate Dems on Capitol Hill shooting down Pres. Biden's 28% corporate tax hike, and stocks higher with records in the Dow and S&P, the "risk on" flows headed out of the dollar and into global currencies today.  That idea may change tomorrow but for today, that was the trend during the North American session.
The strongest currency today was the CHF followed by the AUDUSD. Below is the ranking of the strongest to weakest 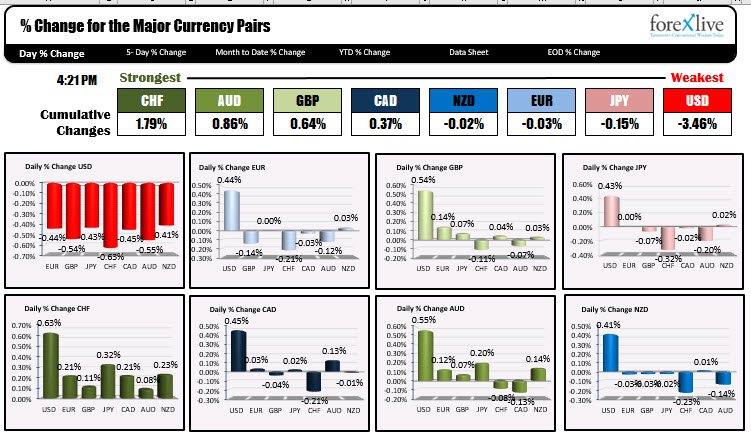 Looking at some of the currency pairs:
As mentioned, lower yields did help to weaken the dollar today. Looking at the changes along the yield curve, the five year yield moved down the most at -5.3 basis points followed by the 10 year at -2.0 basis points.

US stocks moved sharply higher with the Dow and S&P both trading to new session highs. The NASDAQ index also advanced strongly but remains over 3% below its all-time high back in February:

In other markets :
Fundamentally, factory orders came in weaker than expected along with durable goods orders, but the declines were the first in eight or so months. So no big deal. The ISM services index for March soared to 63.7 which was the highest on record going back to 2008