In other markets, the snapshot is showing:

The markets were rocking and rollin today as hope springs eternal (once again) on hopes for more "substantial progress" with regard to a US/China trade deal.  There is hopes for face-to-face meetings to pick up in October (yesterday or day before - I can't remember - we were lamenting that the US/China could not agree on a meeting in September).  I guess October is good enough (maybe flights were too expensive or booked ; ) ).
Analysts also predicted that the US may offer to pause December tariffs in exchange for Chinese agricultural purchases.
If that is "substantial" and the "market" believes it to be....great.   What I know is it certainly moved the markets.

European and US stocks soared with the Nasdaq up 1.75%, the S&P up 1.30% and the Dow up 1.41%.  Bid day for equiites. In Europe, the major indices also had decent gains with the one exception being the UK FTSE which fell -0.55% on the back of a stronger GBP.  More on that later.

US yields across the board moved higher too as hopes for more cooperation, leading to stronger growth down the road.   The Wall Street Journal wrote an article saying that the Fed now saw growth lower by a full 1% in 2020 due to the continued tariff pressure (see post here).  If that negative can become a positive on the hopes for a trade solution, could that -1% become a +1% fast break the other way?   If the Fed stimulates more in September as is expected, there could be even more upside momentum - especially out the yield curve.  Below are the changes in the US today:

Of course, one of the drags in US yields are the even lower yields in Europe. Neverthess, they saw solid gains in their benchmark 10 year yields (see ranges and changes below), but German and French yields remain well below the 0.0% line.

Forex market sees risk on flows (with GBP getting a boost from hopes that no-deal Brexit might be off the table.

In the forex market today, the GBP was the strongest currency, while the CHF and the JPY were the weakest.   The charts below, rank and show the major currencies percentage changes vs each other. 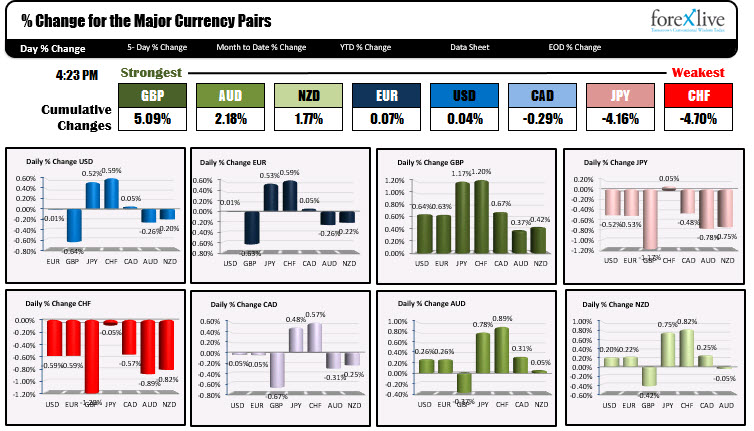 The pounds run higher has been helped by their hopes that UK lawmakers will take the no-deal Brexit out of the hands of the PM Johnson's hand.  Meanwhile, Johnson is hoping that he is able to convince lawmakers to hold another election before the October 31st date (October 14 is his proposed date).  Jeremy Corbyn and the opposition would be happy to do so if there would be a way to ensure Johnson does not exit with no-deal if he won.  Needless, to say there is a lot of hope with the whole Brexit puzzle (including what EU would do if anything). What we do know is the GBPUSD did move to new lows going back to 2016 earlier this week (see weekly chart below), and peeked below a lower trend line in the process, but that break failed.  Traders could argue the GBP is oversold. So it rallied in what may be an outside week, higher close. 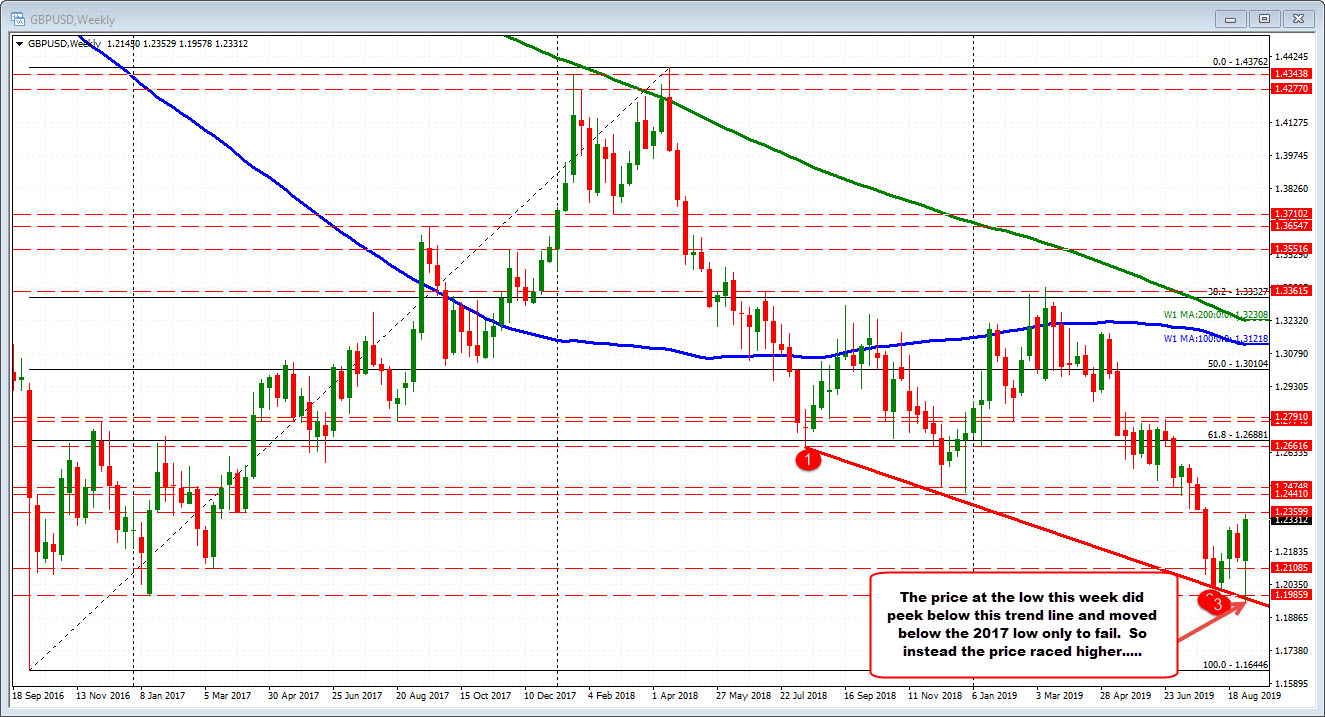 Behind the GBP today were the AUD and NZD (they were the next strongest currencies). That is the Pavlovian 'risk on' flow. Also supporting that idea was that the CHF and the JPY were the weakest.  Typically, those currencies weaken when risk trades are on.   That is exactly what they did today.
The USD was mixed in trading today.

The economic data was decent today with the initial jobless claims remaining steady at low levels. The ADP employment change for August increasing by 195K vs 148K estimate.  Both those bode well for the Friday employment report.  US productivity rose by a decent 2.3% rate.  Factory orders grew by 1.4% with durable goods up 2.0%.  Finally I sent nonmanufacturing index surprised to the upside at 56.4 versus 54.0 estimate.
All that is showing a growing economy. The question is, will it scare the Fed from easing as expected in September.  This week, the comments from Fed officials have seen some thinking 50 bps was not a bad idea.  I wonder how they feel today?