US productivity fell by greater than expected -0.3% (estimate was for +0.9%).  The report shows the decline in productivity resulted from a 2.1% increase in output against the -2.4% rise in hours worked.

An economy can outperform or underperform economic potential by increasing or decreasing productivity. Although the 2nd quarter was revised higher to 2.5%, the -0.3% decline in the 3Q is going the wrong way (it was the lowest level since 2015).  What it does highlight is the tax cuts are not filtering through via business investment and the fingers can be pointed at the trade war as a major reason.

With productivity down, the case is reinforced for the Fed to keep rates steady (or move lower) and for the US and China to make progress on a trade deal.

Along those themes, a White House spokesperson was out saying that the US/China trade deal might not be signed until December. The headline cited discusses continue over the terms of the deal and the venue for signing.   They added that it is still possible that a deal pact will not be reached, but hedged that comment by saying a deal is more likely than not.  HMMM.  Rumblings from China have been that they want prior tariffs to be walked back.  I am not so sure that Pres. Trump would want to give such concessions especially since this is just phase 1 of a multi phase process with the hardest agreements yet to come. Time will tell.

Those headlines help send stocks to their session lows. However by the close, most of the declines had been erased. The S&P index closed marginally higher. The Dow industrial average closed unchanged. The NASDAQ index still lower on the day but recovered more than half of the earlier declines. Below is the percentage high, low, close changes for the major North American and European equity indices.

In the forex market, the JPY and CHF where the strongest on perhaps some safe haven flows. The GBP was the weakest.

Near midday, a political poll came out showing that the Tories had lost 2% of support to 36% while the Labour Party remained steady at 25%. The numbers will below the 50% level risks a hung parliament and more inactivity on Brexit.  That helped to push the GBPUSD lower. The pair fell below its 100 bar MA on the 4 hour chart for the first time since October 10 at 1.28788 on its way a low of 1.2844. Stay below the 1.28788 level keeps the bears/sellers in control. 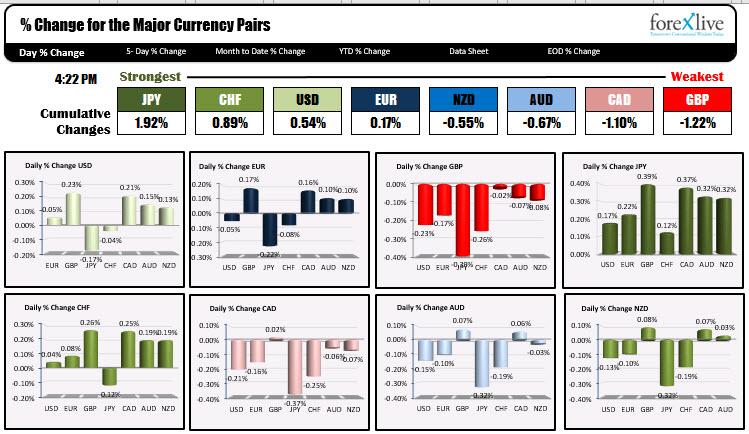 The EURUSUD completed a lap that saw the price rise from a late afternoon low yesterday at 1.1063 to a midday high today at 1.10924. That rally stalled at the 38.2% of the move down from yesterday's trend move lower.  The pair than fell back down to retest the low from yesterday at 1.1063 (low reached 1.10638). Up and down.  We are closing near the low at 1.1066. A move below would be more bearish. Close resistance will be at 1.1073 area which was the October lows. The last 5 hours of trading today stayed below that old low level keeping the sellers more in control.

The USDJPY ran above its 200 day MA yesterday but dipped back below the level today and moved down to 108.81.  The pair wandered higher at the end of the day, but remains below the key 200 day moving average at 109.01. That will remain the barometer for the bulls and bears in the new trading day. Stay below is more bearish. Move above is more bullish.