In other markets, the near end of day snapshot is showing:

In the stock markets today, price action was sensitive to comments from White House and China officials. The WH said they received indications that China wanted to make a trade deal. China later warned that they would need to respond to US tariffs but did not offer any details.  The Chinese delegation will arrive on Thursday. Until then - and through the meetings - the stock markets will be ultra sensitive to the headlines.  If the increase tariffs do go into effect over the weekend, it could be another ugly Monday opening.
The chart below shows the high and low trading range and the % closes of the major North American and European stock indices. The broad indices in the US closed near the lows. The European indices are ending the session mixed with the German Dax leading the charge.

Shifting to the debt markets, the US treasury auctioned off US$27 billion of 10 year notes today and the results were miserable.  Not only did the auction have a tail of 1.4 basis points, but the bid to cover of 2.17x was well below the 6 month average of 2.52x. Dealers were also saddled with more supply than normal.  Not a good auction.  As a result, yields in the US backed up with the 10 year rising to a high of 2.4853%. That compared to a low today of 2.4243%.  Other yields along the yield curve also moved from down on the day to up on the day.

Other fundamental news had Fed's Brainard saying the Fed should target long term rates in the next downturn.  I thought that was the goal of QE and "operation twist" from the last downturn.
Fed's Barkin, stated what is sometimes lost in all the noise, that it is hard to have a recession with unemployment and rates this low.
The weekly oil inventory data showed a surprise draw in crude oil inventories of -3963K vs an expected build of 1900K.  Oil was helped by the report.
In the UK, the GBP was pressured concerns and uncertainties around internal Brexit negotiations, and even the fate of PM May. Although the GBPUSD made new session lows in the NY session, the pair is also closing near the same -66 pips that was trading at the start of the session. The GBPJPY is also within 3 pips of the start of session levels (it was -97 pips vs end of day level of -94 pips - see chart below). 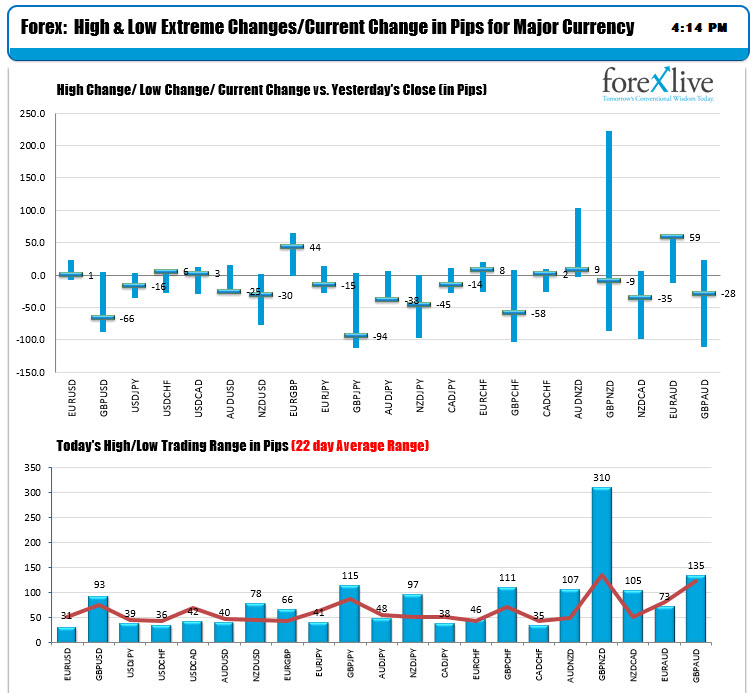 The other things that sticks out from the ranges and changes charts from above are:
The rankings of the strongest and weakest is showing the JPY as the strongest, while the GBP was the weakest.The USD was mostly higher but all the gains were centered on 3 currenies: EUR, AUD and NZD. 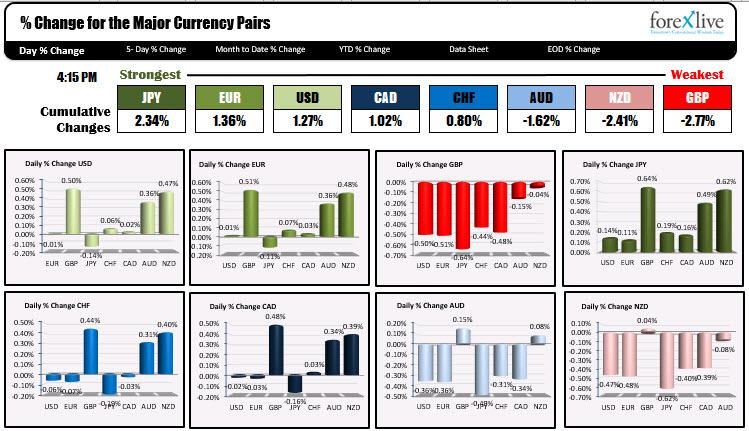 So how would the NY day be characterized in a sentence or two?
"The Forex market in the NY session mostly chopped around as market participants buyed time ahead of the key US/China meetings later in the week. The GBPUSD was weaker due to internal Brexit battles and the NZD, was "weakish" as a result of a cut in rates by the RBNZ".
Overall, there have been better days to trade.