The geopolitical risks remained somewhat muted although there was a report of "rockets" going off near a Air Force Base north of Baghdad. The market was not really bothered by the news.

There was also a slew of Fed speakers including Fed's Williams, Fed's Barkin Fed's Evans Fed's Bullard Fed's Kashkari Fed's Kaplan all bombarding the news wires, but like the rockets and Baghdad , the markets were not all that reactive to what they had to say.  Let's face it, the expectations (and the party line from Fed officials) is that rates at a good place. The economy is at a good place.  If there was a little tilt, some seemed a little less fearful of the risks now that the US is days away from a US/China phase 1 trade deal, and the markets faced the prospects of increased tension in the middle east, and the potential fight was broken up without much damage.

So what else to do but buy stocks.

The major indices closed at record levels today (the S&P and Dow joined the Nasdaq which had a record close yesterday).   The NASDAQ led the way with a 0.81% gain. The Dow industrial average toyed with the idea of breaking above the 29,000 level for the 1st time (the 28,000 level was broken on November 15), but backed away after getting within 12 points of the level.

European shares were more mixed with the German Dax leading the way. It closed at a two-year high, and is just points off of the all-time record high level at 13,596.89 (the high price reached 13,523.34 today).

In the forex, despite less tension, the CHF is ending as the strongest of the majors.  Most the gain was versus the New Zealand dollar which was the weakest of the majors today.  The USDCHF in contrast was up 0.04%, as was the EURCHF.
The JPY was also week on the day as the risk aversion trades continued to be unwound. 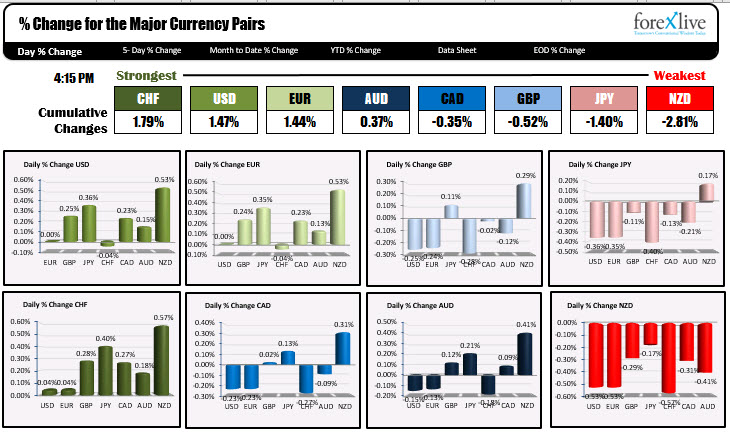 The USDJPY rallied to a high price of 109.576 (the pair closed at 109.12 in trading yesterday). The move higher took the price above a topside trend line at the 109.50 level, but the price backed off modestly. We are ending the day right around that trend line at 109.50. A move above would have traders looking toward the swing highs from the month of November and December . Those levels were focused between 109.68 and 109.723. A break above that area should solicit more buying momentum in the pair. On the downside, watch 109.31. There was a swing low at that level going back to December 26. On December 30th the price cracked below that level and ran to the downside. In trading today a corrective low stalled at that level. The market seems to be paying attention to the area.
As mentioned, the USDCHF is ending the day near unchanged. However, it did move lower into the New York session and found support buyers against its 100 hour and 200 hour moving averages at 0.9710 (the 100 hour moving averages at 0.9711 and the 200 hour moving averages at 0.9707 at the close). If the price is to continue higher. Staying above those moving averages is the risk for traders. On the topside the 0.97382 level is the 50% midpoint of the move down from the December 24 swing high.  Get and stay above that level in the new day and it should solicit more buying with 0.9760 as the next target (61.8% of the same move lower). The price is trading at 0.9731 near the days close.
The GBP fell in European morning trading after Bank of England's Carney was a bit more dovish. The price action took the GBPUSD below its 200 bar moving average on the 4 hour chart at 1.30676.  The low reached to 1.3013 before rebounding into the close. The price is currently trading at 1.30649. That is just below that 200 bar moving average. Look for the level to help determine the bias in the new trading day.
Remember that tomorrow brings the US employment report for the month of December. The expectations are for a solid gains of 160K.  That is below oversized gain of 266K last month, but still pretty healthy given the number of jobs created since the recovery began.