In other markets near the NY session close:

In the US bond market today yields moved sharply lower with the 10 year down about -5.8 bps at the European close. Concerns about the China/US trade meeting led to flight into the safety of the US debt (and maybe potential lower global growth).  However, yields backed up before the 30 year bond auction.  Pres. Trump was mixed in his comments, saying he got a nice letter from Xi, but then reiterated that they changed the deal, and he was starting the paper work on 25% tariffs on $325B of more goods.   The yields are more near the middle of the trading range.

In the European 10 year note sector, the yields ended mixed. There was some flight to safety in Germany. UK yield were also lower, but the more risky countries saw yields move higher (Spain, Italy and Portugal).

In European stocks today, the pattern was that the major indices closed near the lows, led by the France's CAC (-1.93%), Italy's FTSE MIB (-1.82%) and the German Dax (-1.69%).   In the US, stocks plunged with the Dow down -449 points and the Nasdaq down -147 points at the session lows, but hope for a deal (on Trump tilt) sent the prices back higher.
The closing levels are showing:
Below are the low to high ranges and the % changes.

The USD is ending as the weakest currency of the day. At the start of the NY session the greenback was mixed.  I guess the reasoning could be that if there is a deal, there is less flight into the safety of the USD. Then again, the AUD - which should benefit from risk on on a deal - was the next weakest currency today and the CHF - typically a safe haven type currency was higher and the strongest.

Today's near end of day values are a tough one to explain. 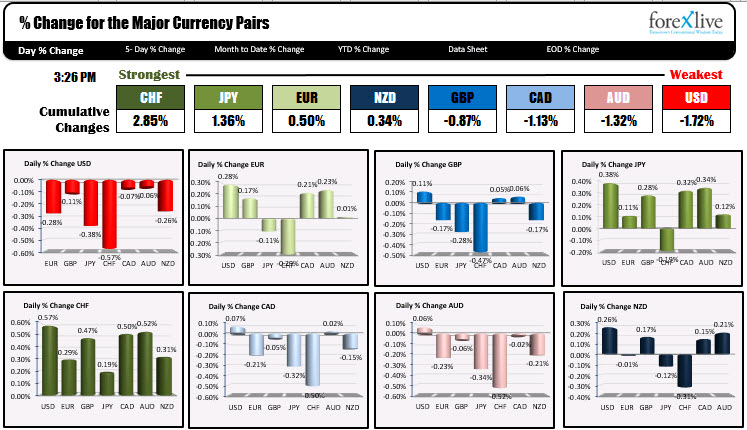 What I can say, is there was some indiviual stories and technical breaks which helped to weaken the greenback.
USDJPY:  For the USDJPY, early on lower yields and lower stocks helped to push the pair lower.   When Trump started chirpling some more positive remarks (sort of), yields recovered, stocks recovered and so did the USDJPY.  Technially, the pair ping ponged off an upper trend line on the hourly chart, and a lower trend line at the lows.

GBPUSD: For the EURUSD, the 100 bar MA on the 4-hour chart and a trend line was broken, and buyers rushed in squeezing the price higher.  The move took the price from the break point at 1.1205 to the sesssion highs at 1.1250, before settling and consolidating below the 200 bar MA on the 4-hour at 1.12304 and above the highs from yesterday's trading at 1.1212. 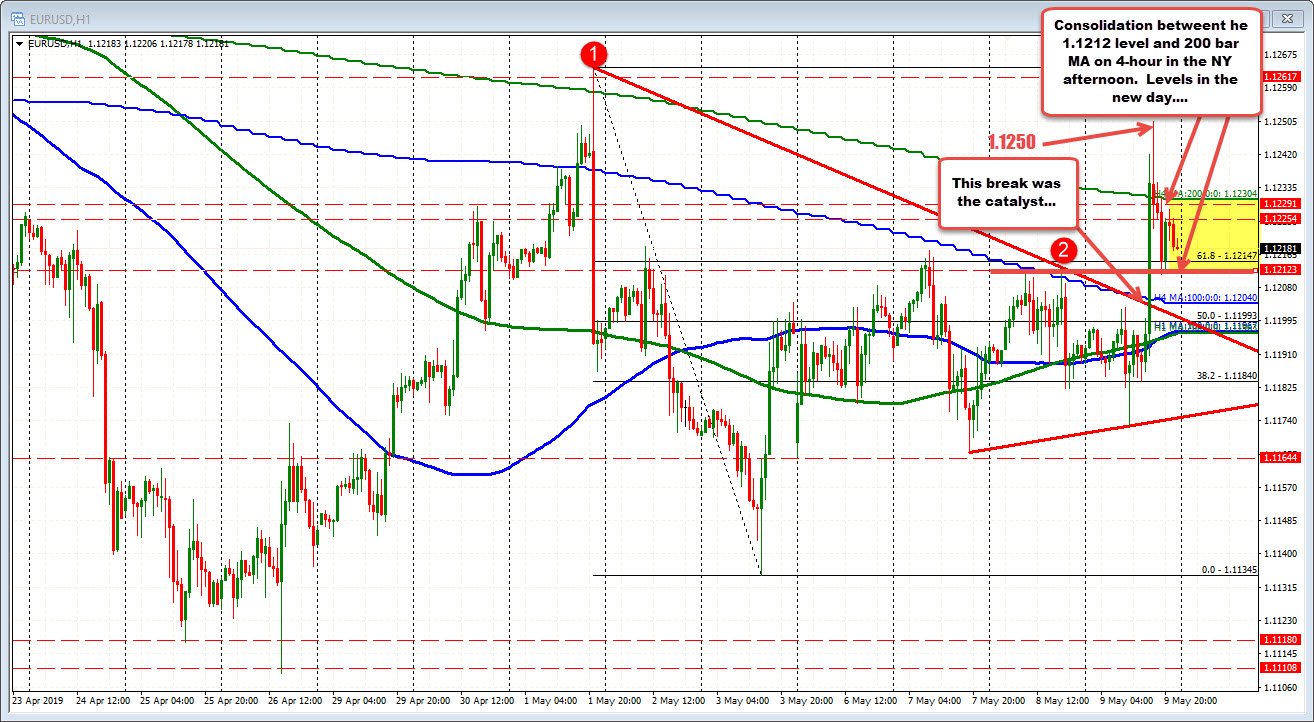 GBPUSD: For the GBPUSD, the pair made a break above its 100 day MA at 1.2998 and topside trend line and moved modestly higher. The GBPUSD was more reluctant to rise vs the dollar. 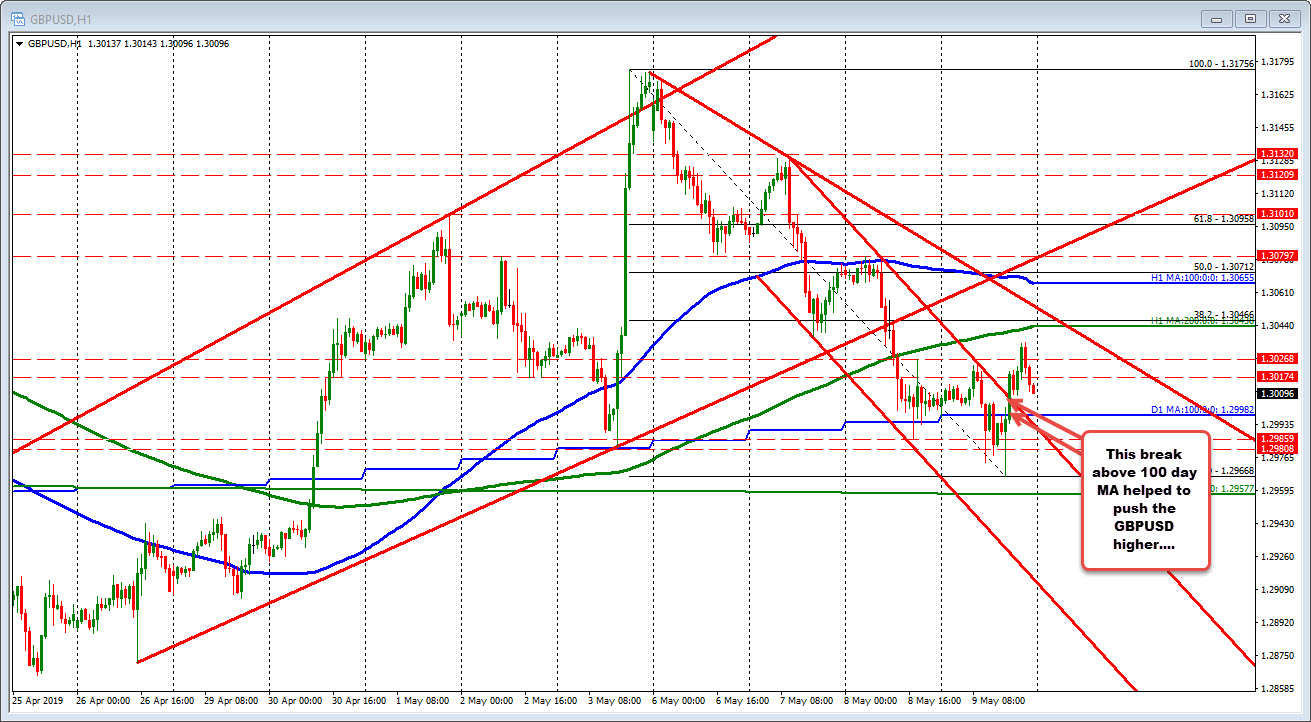 AUDUSD: For the AUDUSD, the price moved lower in Asian trading, consolidated in the London sesson and the started to squeeze higher in the NY afternoon.  Technically, the lows held the lows for the week (Monday's lows). . That floor gave buyers more confidence to stick a toe in the water (PS the price did not go down further on the US stock selling in the morning).  The run higher ended up stalling at the 100 hour MA (currently at 0.6996).  IN the new day, the 100 hour MA will be a barometer for the bulls/bears. 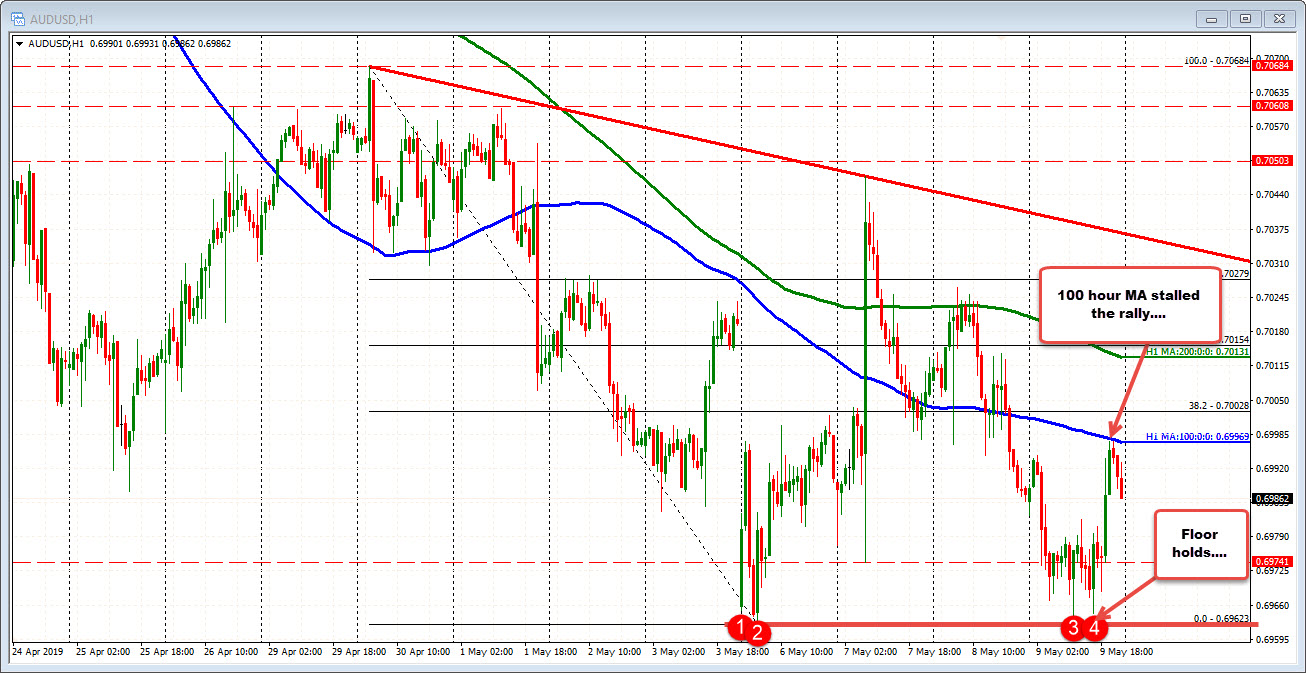 Overall, it was still a choppy day, as traders continue to be worried about US China deal, but there are some technical levels that helped traders today and leave a history into the new trading day.