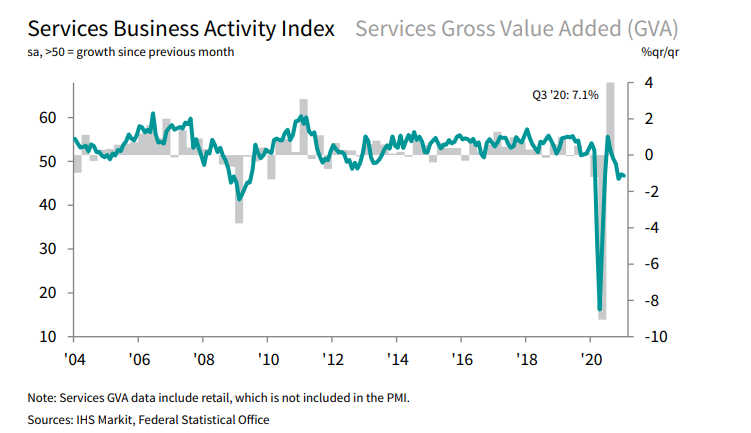 The preliminary report can be found here. Little change to initial estimates as this reaffirms a downturn in German services activity amid tighter restrictions with overall economic conditions grinding towards a halt in general. Markit notes that:

"The service sector was a drag on the German economy at the start of the year, according to latest PMI data, with business activity falling for the fourth month in a row and at a slightly quicker rate as lockdown restrictions were further tightened. After recording the smallest of expansions in the final quarter of 2020, the economy looks likely to see a renewed contraction in the first quarter of 2021, with the current strict lockdown measures continuing until at least mid-February and even manufacturing showing some loss of growth momentum.

"There was better news on the jobs front, as the recent steady rebound in service sector employment continued into the new year. However, progress remains relatively slow and uneven, with businesses in some industries still leaning heavily on the short-time work scheme.

"Services firms have continued to grow in confidence about the year-ahead outlook for activity, reflecting hopes that restrictions can start to be lifted as vaccinations are rolled out across the population. However, current conditions for businesses remain challenging, not least in terms of them having to absorb rising costs. The survey's measure of overall cost pressures in the economy reached its highest for over two years in January, though manufacturers have so far taken most of the brunt."