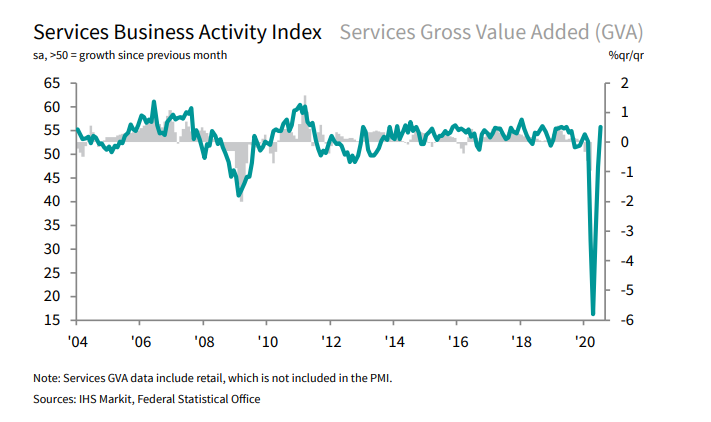 The preliminary release can be found here. A slightly lower revision relative to initial estimates, but nothing that shifts the narrative from the earlier report. This just reaffirms a modest rebound in German economic conditions as lockdown restrictions are eased.
Moving forward, the focus will turn towards how labour market conditions hold up - especially in the latter stages of Q3 - to see if the pace of the recovery can be sustained.
For bank trade ideas, check out eFX Plus
Markit notes that:

"The PMI data for Germany so far point to a broadbased rebound in activity as the country emerges from an unprecedented downturn, with the service sector joining manufacturing back in growth territory and even expanding at the slightly quicker rate in July. According to the underlying data, the bounce-back across services has so far been led by the reopening of those sectors previously shut down. Therefore, with ongoing limits on capacity in these areas, it's important for a sustained, strong recovery that other parts of the tertiary economy such as finance and professional services start to gain more momentum as well.

"Renewed hiring across the service sector in July was a welcome - and somewhat surprising - development, however it went very little way to reversing the sharp decline in employment seen from March to June and was still more than offset by further steep staff cuts in manufacturing.

"Following the record 10.1% collapse in economic output in the second quarter, we expect GDP to rebound around 6% in the third quarter, but not get back to pre-crisis levels until 2022. The outlook still remains uncertain, however, with businesses in the service sector indicating that any recovery is dependent on a major 'second wave' being avoided."