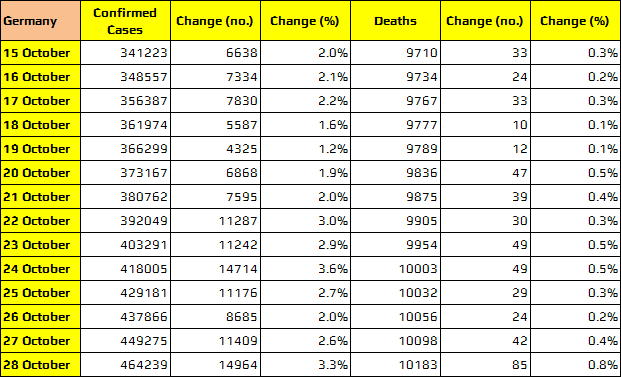 A record day of infections for Germany ahead of what will be the imminent announcement of tighter restrictions, after Merkel meets with state premiers later today.
As we see the number of daily infections rise, the death count is also starting to gather pace over the past week or so. As of today, there are ~121,000 active cases across the country. For some context, that figure was just ~24,000 at the start of October.
Meanwhile, another 108 virus patients were reported to need intensive care with the total now sitting at 1,470. On that note, total capacity for intensive care across German hospitals has dropped to 7,682 (26%) from 8,403 (28%) yesterday.
As mentioned yesterday, although virus cases aren't the direct cause affecting medical capacity, it plays a role in delaying treatment for other diseases as healthcare workers have to spend more time and effort in dealing with the growing virus cases.
* The figure was reported earlier by Reuters but the RKI dashboard was not showing a similar tally (total figure unchanged but daily change showed an increase of 9,877). That has now been corrected, hence a bit of a delayed update to the report today.