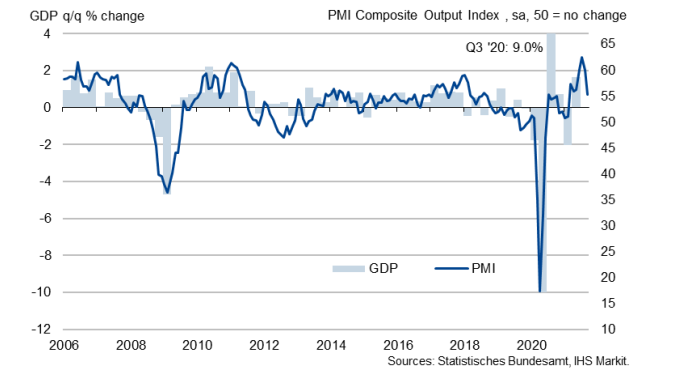 Those are some big misses and raises concerns about the slowdown in the German and euro area economies as we get towards the end of Q3 and looking towards Q4.
Of note, the manufacturing output index fell to a 15-month low as supply bottlenecks and capacity constraints continue to weigh on the sector. Markit notes that:
Invest in yourself. See our forex education hub.

"September's flash PMI survey showed a notable slowdown in the rate of growth of the German economy, in a sign that activity is beginning to level off after rebounding sharply over the summer. However, despite the slowdown in September, the pace of economic growth in the third quarter still looks to have surpassed the 1.6% expansion seen in the three months to June.

"The survey pointed to a continued drag on growth from the manufacturing sector, which is bearing the brunt of supply shortages and rising costs. Coupled with this, services activity showed its smallest rise since May, as the post-lockdown surge in demand waned further.

"While business sentiment towards future activity remains positive, reflecting continued hopes of an end to the pandemic, growth expectations are being held back by supply-chain concerns and the risks posed to demand from rising prices."