Gold and Japanese yen: Which one is not a safe-haven asset anymore?

In times of political and economic uncertainties, analysts recommend investing in safe-haven assets. The US dollar, Japanese yen, and gold were always considered as the main refuges.

However, since recently, the USD with the weak American economic data and the easing monetary policy has been losing its status. What about the JPY and XAU? The situation is unclear. Let's get a grasp on it.

The new year started with the US-Iran tensions. Let us remind what happened. The US airstrike at the direction of Donald Trump killed a top Iranian commander Qassem Soleimani. Iran retaliated striking multiple US bases located in Iran and Iraq.

The conflict started on January 3 and the escalation continued until January 8. After, the tensions calmed. What could we expect? According to the sense of the safe-haven asset, the Japanese yen was expected to strengthen. However, the rise was limited. Let's take a look at the chart. 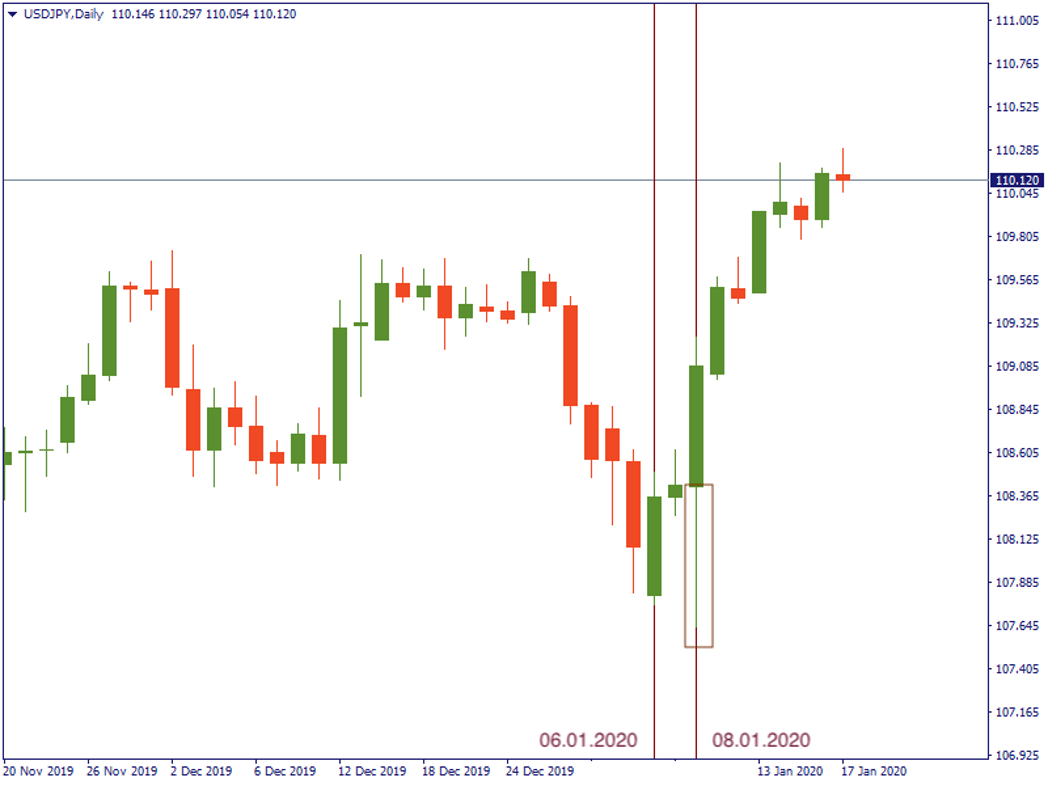 As you can see, the USD/JPY pair kept falling until January 3. On January 6, the rebound happened. Since then, the pair has been moving up. The Iranian retaliation on January 8 was reflected with the long lower shadow. Nonetheless, the USD/JPY continued rising.

The weakness of the JPY could be caused by the New Year holidays that lasted for the Asian markets until January 6. However, the Japanese investors who returned to work didn't support the currency.

What are the reasons then?

Analysts name several reasons for the JPY weakness. The first one is the willingness of the domestic asset managers to buy higher-yielding foreign assets. The second reason may be hidden in the trade deficit of Japan. The third point we should consider is the overseas capital flows of Japanese companies.

One more reason we can mention is the carry trade strategy. The idea of the carry trade is to borrow the low-interest currency and invest in the higher-interest currency. Since the last year, the major central banks have been easing their monetary policy. The basis of the loose policy is the lower interest rates. That means the advantage of the Japanese yen as a low-interest currency has been vanishing. This year, the central banks are anticipated to hold the rates unchanged. However, this factor unlikely supports the JPY. Some analysts believe the euro with its extremely low rates can be more attractive for carry-trade traders.

JPMorgan currency strategist noticed that in 2019 the pair had been trading in its tightest range since 1980 at 7.6%. It signals upcoming levels to be narrow. 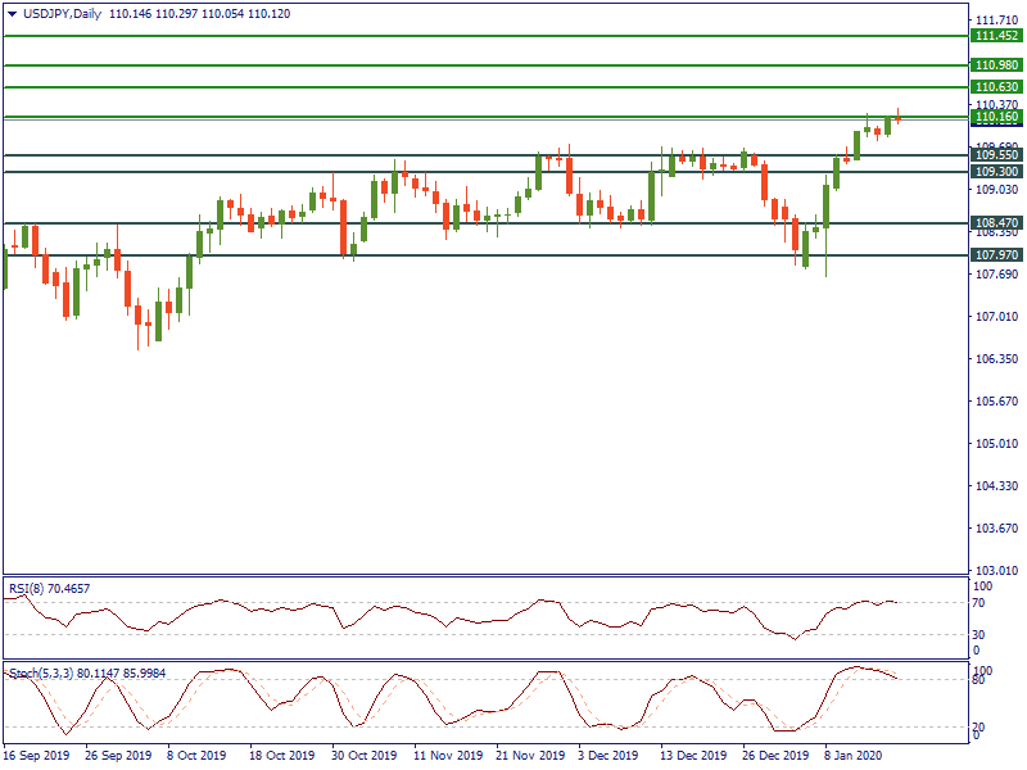 The reaction of gold on the US-Iran escalation was more visible than the one the yen experienced. On January 8, XAU/USD reached the highs of April 2013. Later the pair moved down and it was expected. Firstly, the pair reached significant highs. Each maximum and minimum are always followed by a correction. And such a correction happened. Secondly, the market sentiment improved due to the remission of the US-Iran conflict and the upcoming first phase of the US-China agreement.

What about the future? TD Securities argues the strength of the gold despite the current consolidation. As for the analysts at MKS PAMP Group, they believe in the strength of the XAU/USD with the average price of $1,636 with the high at $1,780 an ounce. The support is anticipated to lie at $1,520. Analysts predict the pressure from geopolitics and politics. The US presidential election may be an additional risk-off factor.

As a result, we can confirm the asset is the safe-haven asset that will strengthen at any time the market sentiment turns negative.

The risks for gold power also exist. Rumors of the global economic recession have passed, the central banks are anticipated to keep the rates on hold at least for a while, US-China trade war tensions improved, as a result, the gold's rise may be limited. But we should not forget about the unexpected factors such as political and geopolitical tensions. Thus, traders should follow the news to be up to date.

As we mentioned above, XAU/USD reached highs of April 2013 on January 8. After that, the pair tuned down with the following correction. Currently, the pair has been trading in a channel of 1,545-1,562. A break above 1,562 will lead the pair to the next resistance at 1,575. The previous maximum of 1,611 is high. It means the pair may form new highs. Nevertheless, the RSI indicator and Stochastic Oscillator are in the overbought area. That may cause a prolonged correction. The next support is at 1,520. 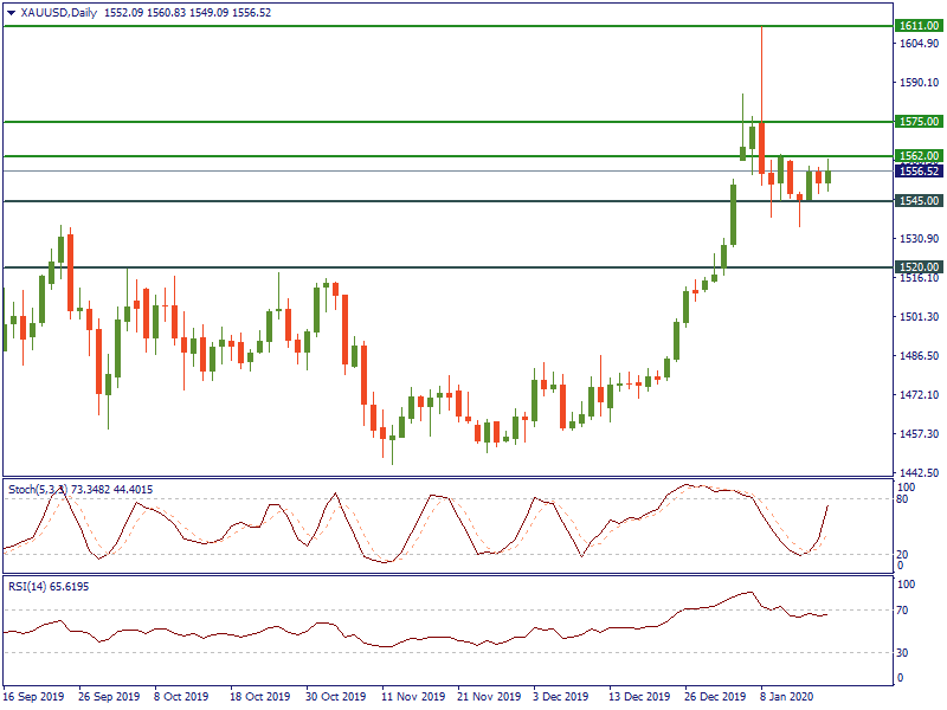 To conclude, we can say that the gold is still the safe-haven asset that is supposed to rise in times of uncertainties and decline when the risk sentiment is on. As for the Japanese yen, the currency is not the refuge for investors anymore. The carry trade strategy is the basis of the future position of the JPY. If it is still the low-interest currency using for borrowing, it will have an opportunity to appreciate against the USD. Until then, the strength of the yen is limited.

All the information above is signaling the change in the way we determine the strength of the domestic currency. If before the rate cut signaled the weakness of the currency, it's more likely that in 2020, investors will look at other easing measures.

In this case, the economic calendar is not the major way to predict the currency moves. Check the news with FBS to get the recent updates on the monetary policy.