Greece could get gradual debt relief from EU

EU lenders have been working on a plan to offer the country gradual debt relief on condition that it adopts additional reforms by 2022.

They would initially allow lower interest rates and longer maturities on Greece's €316bin debt. At a later stage, there would be talks on linking debt payments to economic growth provided Athens implemented measures to be agreed with creditors by 2022.

The plan has been discussed among officials from the European Commission, the Eurozone's rescue fund, the ECB, and the larger Eurozone nations, the paper said.

"At this moment, we are not looking at debt relief but at completing the third programme's first interim review."

On Thursday, Jeroen Dijsselbloem, chairman of the Eurogroup, had said they were concerned with the quality of the reforms Greece had promised in return for its bailout.

I'm outta here to get on with my week-end. Have a good day one and all. 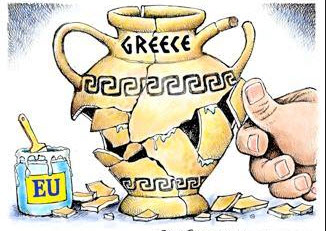