Greece may be about to win the showdown with Europe

Zeit reports on a new offer

German newspaper Zeit reports that the EU and ECB are about to extend an offer to Greece that would extend the bailout program until December.

They would give Greece €10 billion from the ECB's bank recapitalization fund and that would allow it to repay IMF loans. 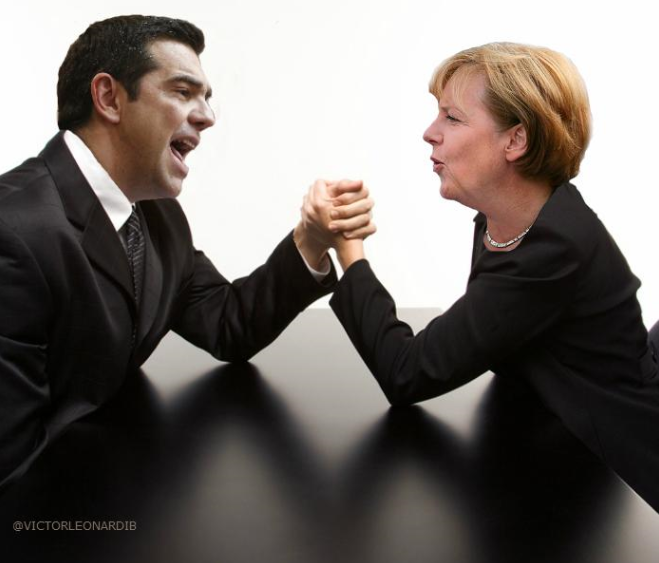 The IMF is against the deal and said not to be participating. The funds would take the IMF out of the picture and leave only the EU and ECB as Greece's creditors.

It's an offer, not a deal but Greece has been playing an epic game of chicken and they might actually win. The downside is that they're right back in this position in December. From the EU/ECB perspective, they're likely hoping that Tsipras doesn't have as much political support then and they can push through their demands then.

Here is the Zeit story: http://www.zeit.de/wirtschaft/2015-06/griechenland-euro-iwf

"According to information from TIME and TIME ONLINE from familiar with the negotiations circles is to be extended until the end of the current rescue program. In this program, ten billion euros are left, which should be actually used for the recapitalization of banks. This money will now be used to settle the Greek debt to the European Central Bank (ECB) and the International Monetary Fund (IMF) in the coming months.

The ECB participates in the financing, by will allow the Greek government to spend additional short-dated government bonds for two billion euros. The Greek banks would buy these bonds and can deposit as security for fresh money from the ECB. So far, the central bank, however, had always resisted."

Update: Varoufakis has reportedly delivered a new proposal to the Troika as well.

Update 2: Merkel says she only knows of the deal that Greece is presenting. The euro quickly dropped a half cent, but I'd be hesitant to pin it on this.

Update 3: The euro is all over the place on these headlines. The info is so murky and confused and translated. I'd rather sleep in a rats nest than wade into the euro at the moment.