Here's why it could get even uglier for oil, and quickly

ETFs are a big problem 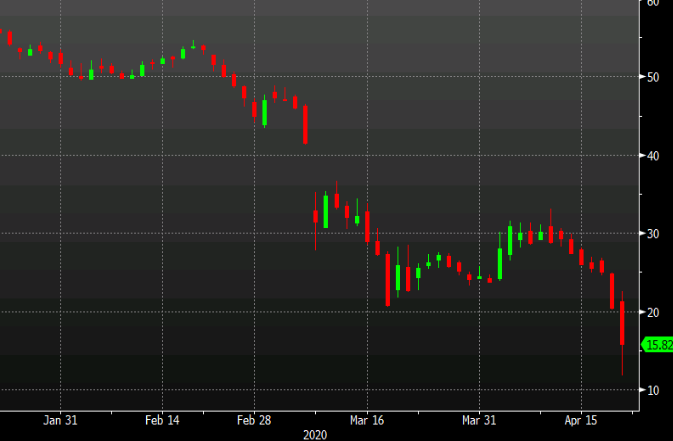 I have been writing about the problems with the USO ETF since last week and with oil falling into negative territory, a pitiful issue has become a potentially systemic one.
The US ETF will hold something like 30% of June futures at the open today because retail traders have absolutely poured money into the instrument, thinking it was a long-term bet on oil. It's turning into one of the great incinerations of retail money of all time. It currently holds $4 billion and is set for a steep fall today.
Retail losing money is nothing new but there's a systemic risk now. If June oil takes a dive like May did, the ETF won't be able to close out positions. It could realistically be holding a massive negative position and bankrupt itself, leaving the exchange massively underwater. The exchange's first job is to protect itself and now faces a tough decision: 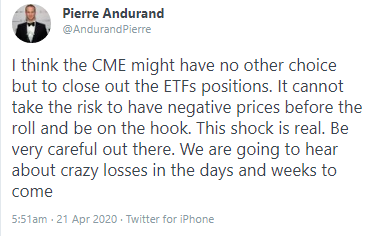 The problem is execution. Trying to get out of a trade holding 30% of open interest would  undoubtedly going to swamp oil and result in it going negative.
What should happen is that online brokers should start closing out retail positions in USO to protect them, or at least ban trading in the instrument. It's utterly broken and there's a time when traders need to be protected from themselves.

Not only that but funds have undoubtedly been wiped out. There were people who wrote options on futures on the May and June contracts and hedging for a fall to -$40 was probably not something on their minds. I've heard all kinds of rumours of funds blowing up and the bigger systemic risk is that something takes down the exchange.
Update: USO has been halted for news pending.
The obvious move is to shut down the ETF but the problem is that if you announce you're selling 30% of open interest, you guarantee a run on it.
There are a lot of people who are angry that it's come to this. The USO shifted to putting 20% of open interest in the 2nd month contract on Thursday but that was whistling past the graveyard.
People are also upset at the exchange for allowing negative prices, saying it broke market integrity.
No doubt there is some real panic among both ETF managers and at the CME. This should be interesting.
See here for global coronavirus case data