Here's why the Brexit vote could start getting scary

Bloomberg has a handy round up of some of the recent major Brexit polls. As you can imagine, they're very close, and the edge is with the stayers. 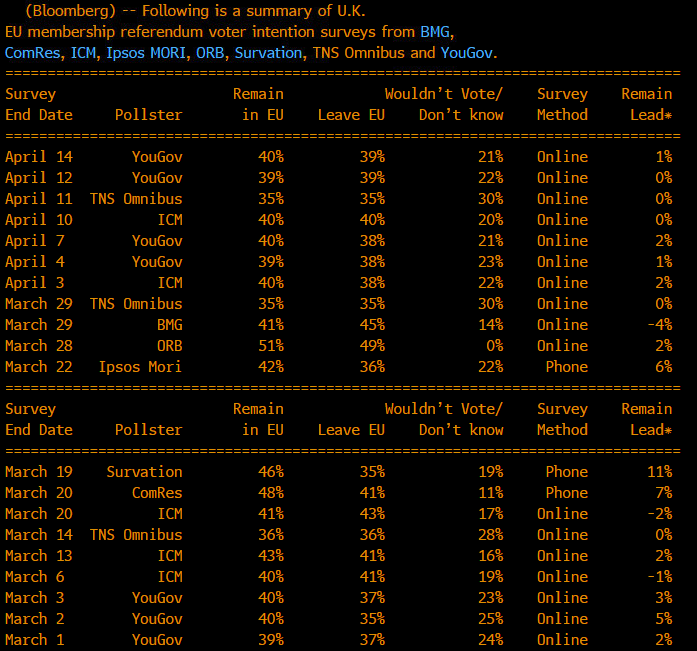 I love trading against the fear of political events, the last election and the Scottish referendum being two of the most recent. I was all set up to go the same way on this but I'm becoming deeply concerned about what I'm picking up from friends and acquaintances. When talking to people I'm hearing more people saying they'll vote to leave than those who'll vote to stay. These are people across all walks of life from city workers to taxi drivers to business owners. Many of these I would never have pegged as leavers.

The biggest issue that seems to crop up is the lack of knowledge about what staying in or leaving Europe actually means. I honestly don't think that anyone knows from Cameron at the top to the old biddy across the road. I've had the government articulated leaflet on the reasons to vote to stay but it's as airy as hot air balloon. Immigration is a big factor in people's thoughts too. Many think the immigration issue is going to disappear with a wave of the pen if we leave.

Without going down the political discussion road, the main point is that I'm not as confident on the result as I have been with other events. I think that there's a much greater risk of a vote to leave than I thought previously.

What people say to others down the pub or on the bus is often far removed from what people actually put on the ballot paper. Private polls are subjective at the best of times, particularly the ones commissioned by our wonderful press. I suspect that when it comes to the crunch many will follow the path of least resistance, and that will be a vote to stay. However, I think it might be closer than what many imagine.

For the pound, there's not been too much Brexit trading of late and I don't think it's going to really ramp up until May at least. There's going to be some hairy times along the way and we'll probably start to see these polls having a bigger say in movements. If the polls start leaning towards leaving, that might start scaring the quid to a greater degree.