Clinton never reached this high in the polls 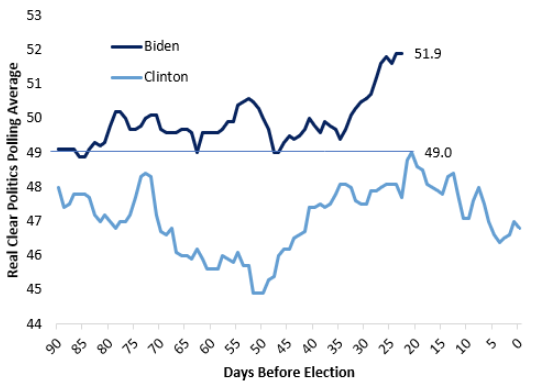 The chart shows the comparison between Clinton and Biden ahead of their respective elections.
Biden has opened up a wide polling lead but we're 22 days away from the election and it's notable that this was the exact time last cycle that Clinton peaked. Her support faded over the final three weeks of the campaign and Trump won narrow victories in Florida, Pennsylvania and Michigan to take the Presidency.
Will history repeat itself? As Trump gets back on the campaign trail after coronavirus, it's worth contemplating but there are two big differences: 1) Clinton never reached this much total support. Biden is at almost 52% while Clinton never hit 50%. 2) There are fewer voters who say they are undecided; leaving less room for a swing.
I believe this race now is all about the Senate and Politico notes today that Democrats are far out-fundraising their opponents.
The latest poll is from IBD/TIPP, who correctly predicted Trump's win in 2016. They have Biden ahead 51.9% to 43.4% as say there are few signs of history repeating itself.

In 2016, almost all presidential election polls pointed to a Hillary Clinton victory over Donald Trump. The IBD/TIPP Poll was one of only two election polls credited with predicting President Trump's 2016 victory. TIPP, IBD's polling partner, succeeded in picking up on the greater enthusiasm among Republicans for their candidate.

Yet the latest IBD/TIPP Trump vs. Biden poll has a few stark contrasts with the Trump vs. Clinton race. Most obviously, a majority of likely voters back Biden (51.9%). Yet Clinton's support topped out around 45% in IBD/TIPP presidential election polls in the final weeks of the 2016 race.

Further, Biden's 9-point lead among independents in the latest IBD/TIPP 2020 election poll is a big turnaround from 2016. Trump carried independents 43%-42% in 2016, according to a postelection Pew Research survey of verified voters.