Technology is the economic double-edged sword. On the one hand, it’s a primary source of human progress; on the other, rapid change can turn an economy upside down. On Friday, I tried to envision how a large-scale automation of the fast food industry would change the world. It would make dining out more affordable but at the cost of millions of displaced workers, who could need years to find work.

It was an exercise in economic daydreaming but here’s a technological change that’s at our doorstep and might already be causing that kind of pain. We’ve hit the tipping point in online shopping. There is a clear pattern in holiday earnings. Brick and mortar stores like Best Buy had a big drop in sales while UPS missed on earnings because of a labor shortage on surging last-minute ecommerce demand.

The Wall Street Journal showed on Friday that retail foot traffic has halved since 2010. 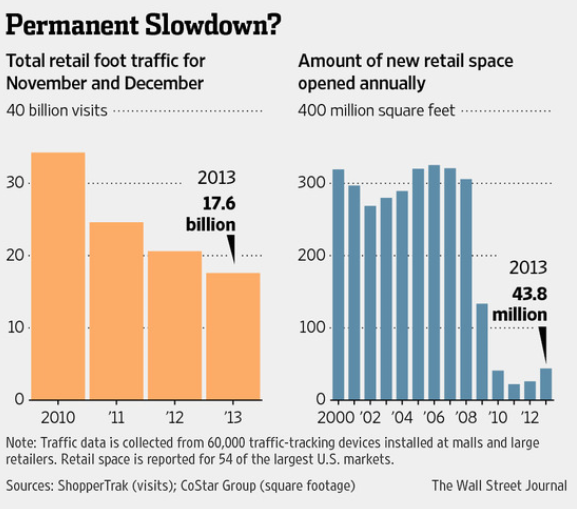 I have been writing for years about the bubble in US retail square footage. The day of reckoning is here.

Want to know how it will happen? Picture Blockbuster, which was a video rental giant that employed thousands of people. Technology made them obsolete and, eventually, bankrupt. Now picture the same thing happening to electronics retailers and many others.

In the long run, that kind of change is good for an economy but in the transition, it can be absolutely devastating. In the shorter term, it means more downward pressure on prices and wages as retail workforces are trimmed.

Call it the Economic Blockbust.